Boxing Day was moved to January 1st due to all the rain. We hunted from the kennels and the footing was pretty good, as was the whoopee wagon (those Guinness cupcakes made by guest Michelle Millsap were AMAZING!). 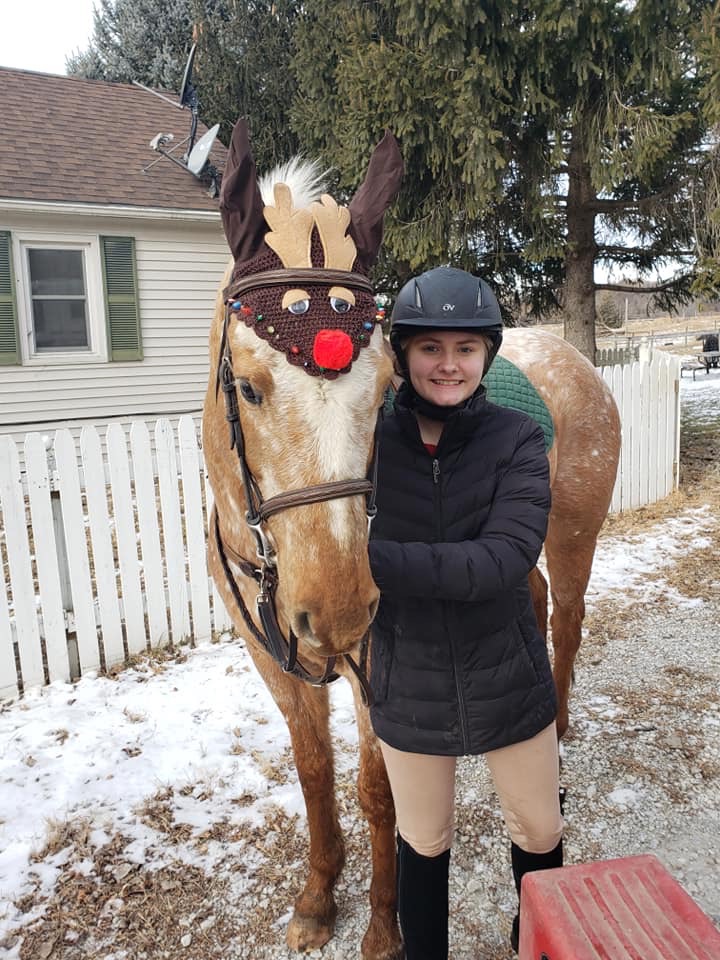 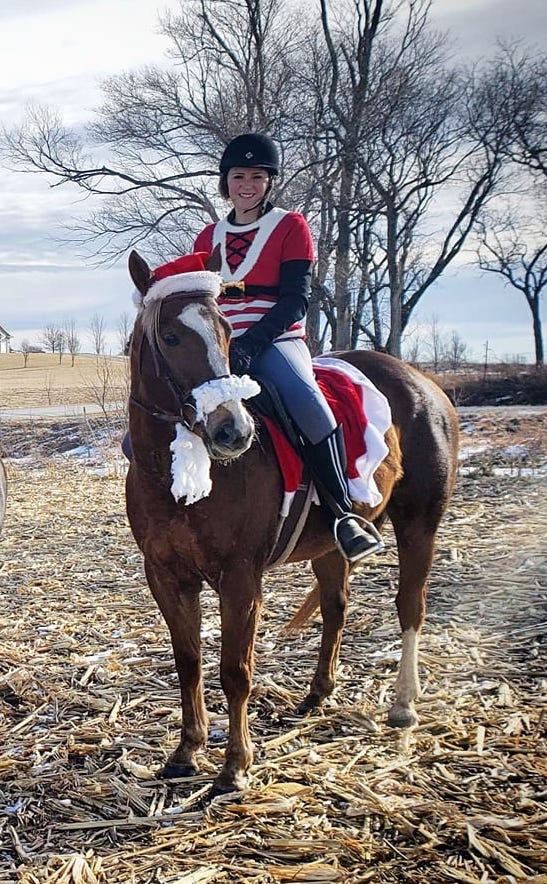 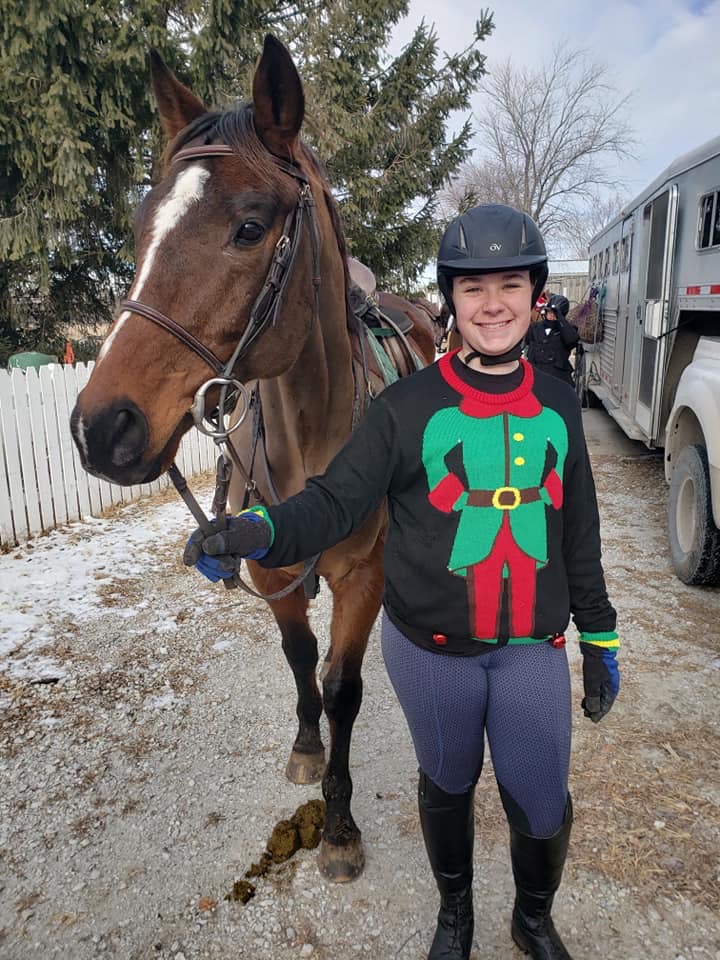 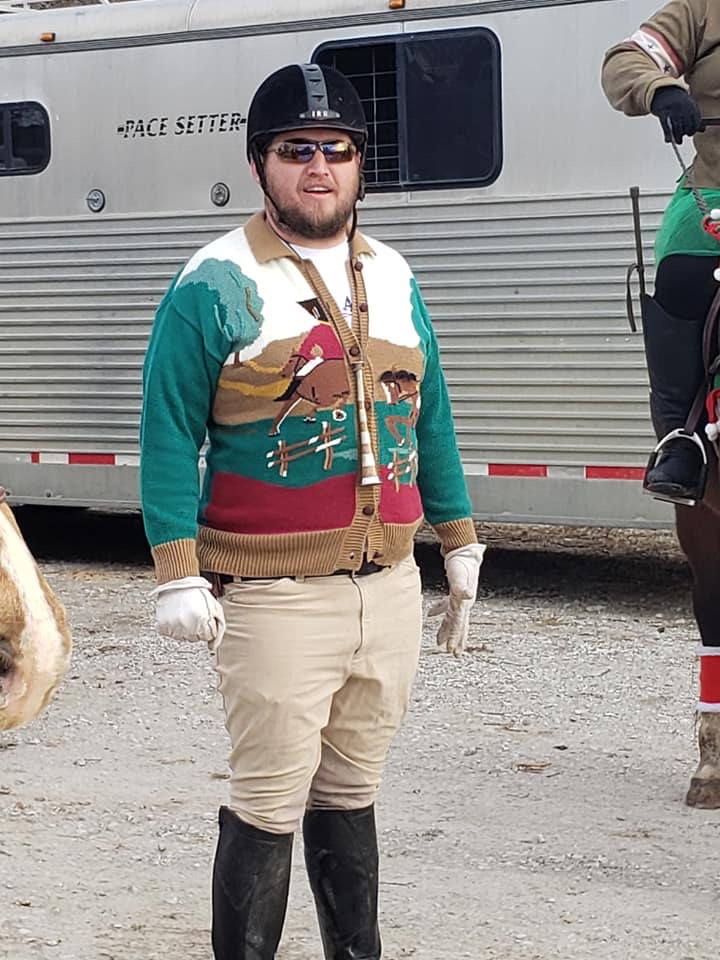 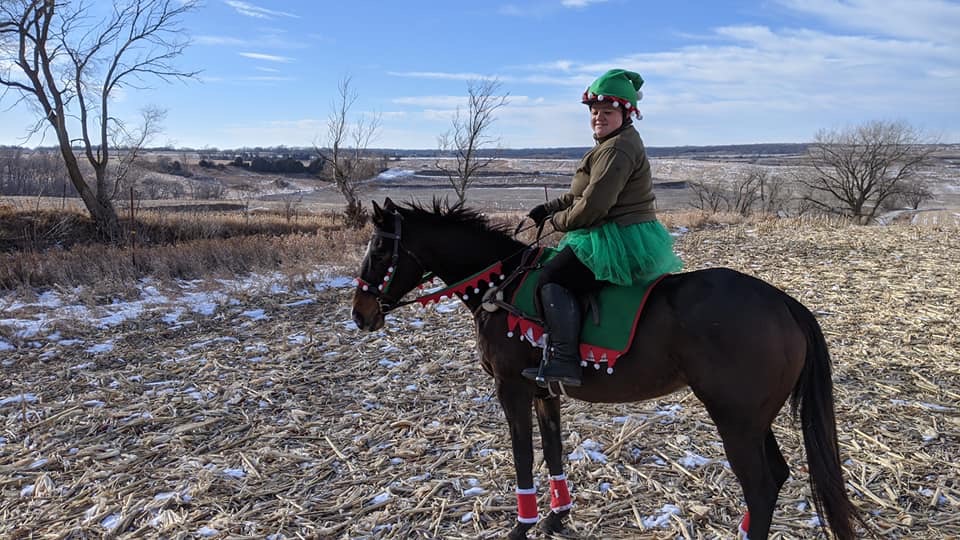 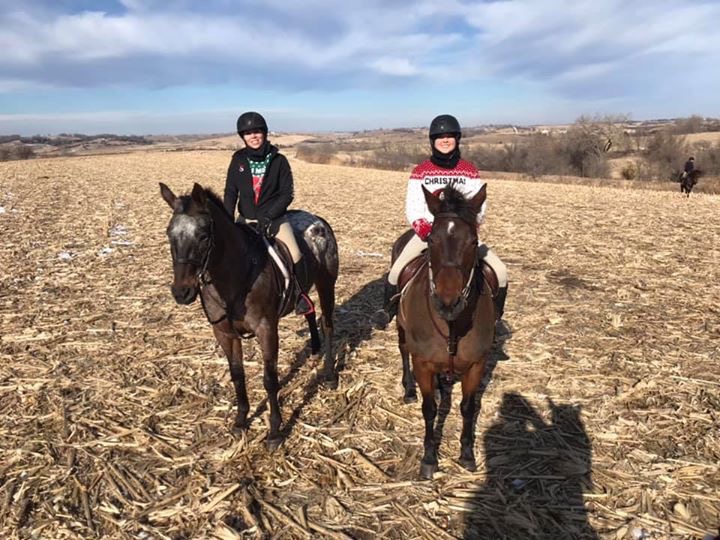 We headed east out of the kennels and crossed the wooden bridge, passed Big Jim’s pasture and started into the cornfield, when Jamie Haith view a BIG coyote. Everyone viewed, it was so big! Trotting big as day across the cornfield. Huntsman Dave was hunting a bitch pack, 13 bitches all in heat. Unfortunately, he couldn’t encourage them on. We were headed south and the coop straight ahead of us was damaged. Jubilee and I had replaced the coop earlier in the summer, but something had come along and plowed it to the ground. We had come out earlier in the week to see the damages and didn’t have enough supplies to properly fix the coop. It was not safe to jump.

Huntsman Dave had to wait and let the coyote take his own path and hope the hounds would pick it up once he carried them a little farther. No such luck. They voiced and tried to work the line, but they couldn’t put it together.

We worked the honey pot, nada.

We made a loop and headed back towards the kennels. Our time is limited when the sun comes out. The ground starts to get a bit slickery.

We had a great brunch that Brit and Adam Gengenbach. Adam brought everything and set it up, Brit was out for the count with a nasty virus that had her lose 14 lbs and spending days on the couch. 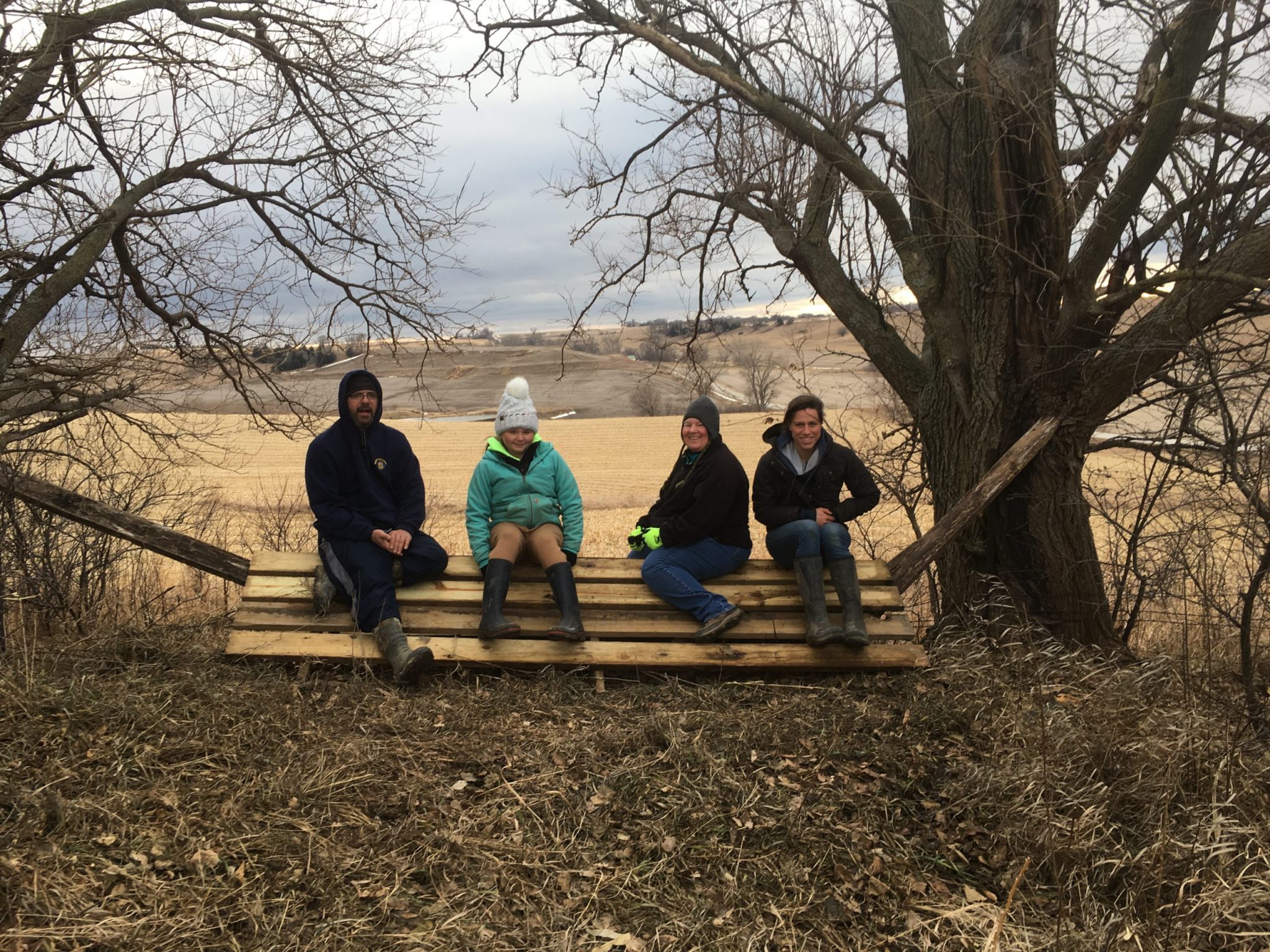 the north side of the coop. jumps downhill from this side. 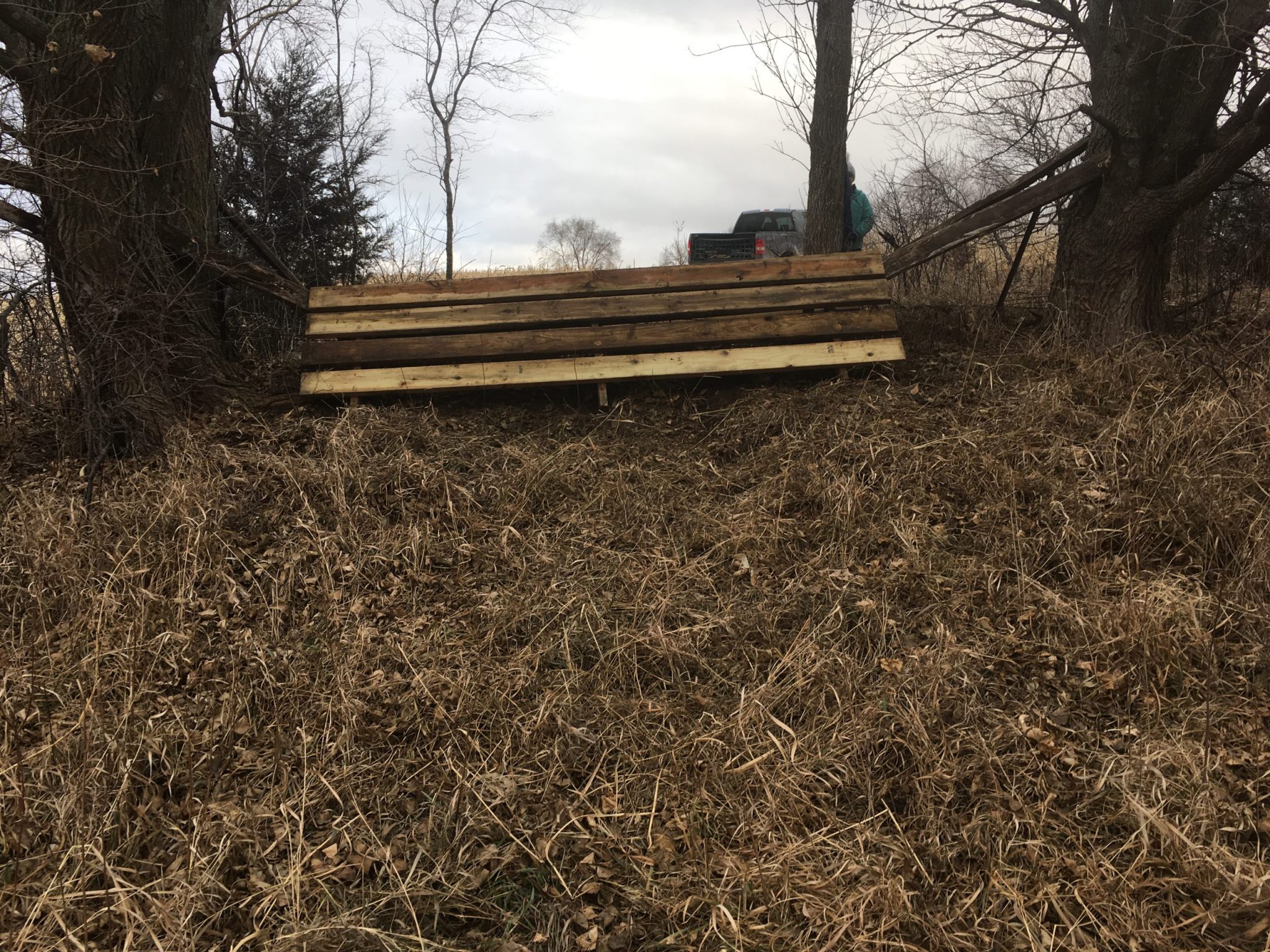 Friday, whipper-in’s Jubilee and Catherine, Cory and Bray Duckworth and I worked at the kennel country. Jubilee and Cory rebuilt the uphill/downhill coop-that was an O.L.D. coop!

Jubilee and Cory then reinforced the coop that had been damaged. Catherine and I cleared a wide path that Huntsman Dave likes to travel and we cleared the brush off a new coop that we built this summer-it replaced a VERY OLD vertical, messed around with a gate that needs to be rehung, marked a spot for a new coop and made plans to clear out an old path that will be super fun to ride. It will have a few nice size logs to jump over. 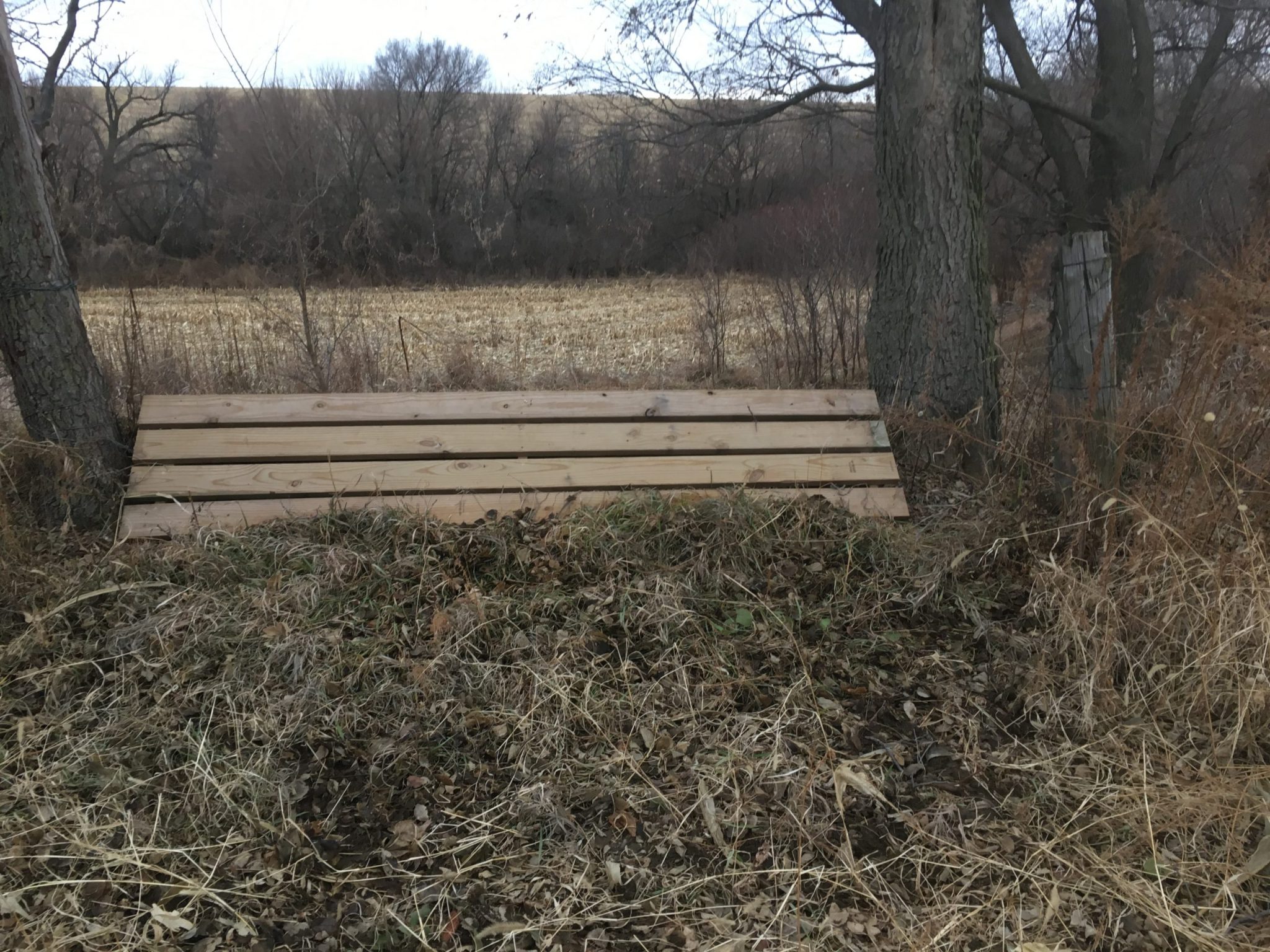 cleared the brush off this newly minted coop 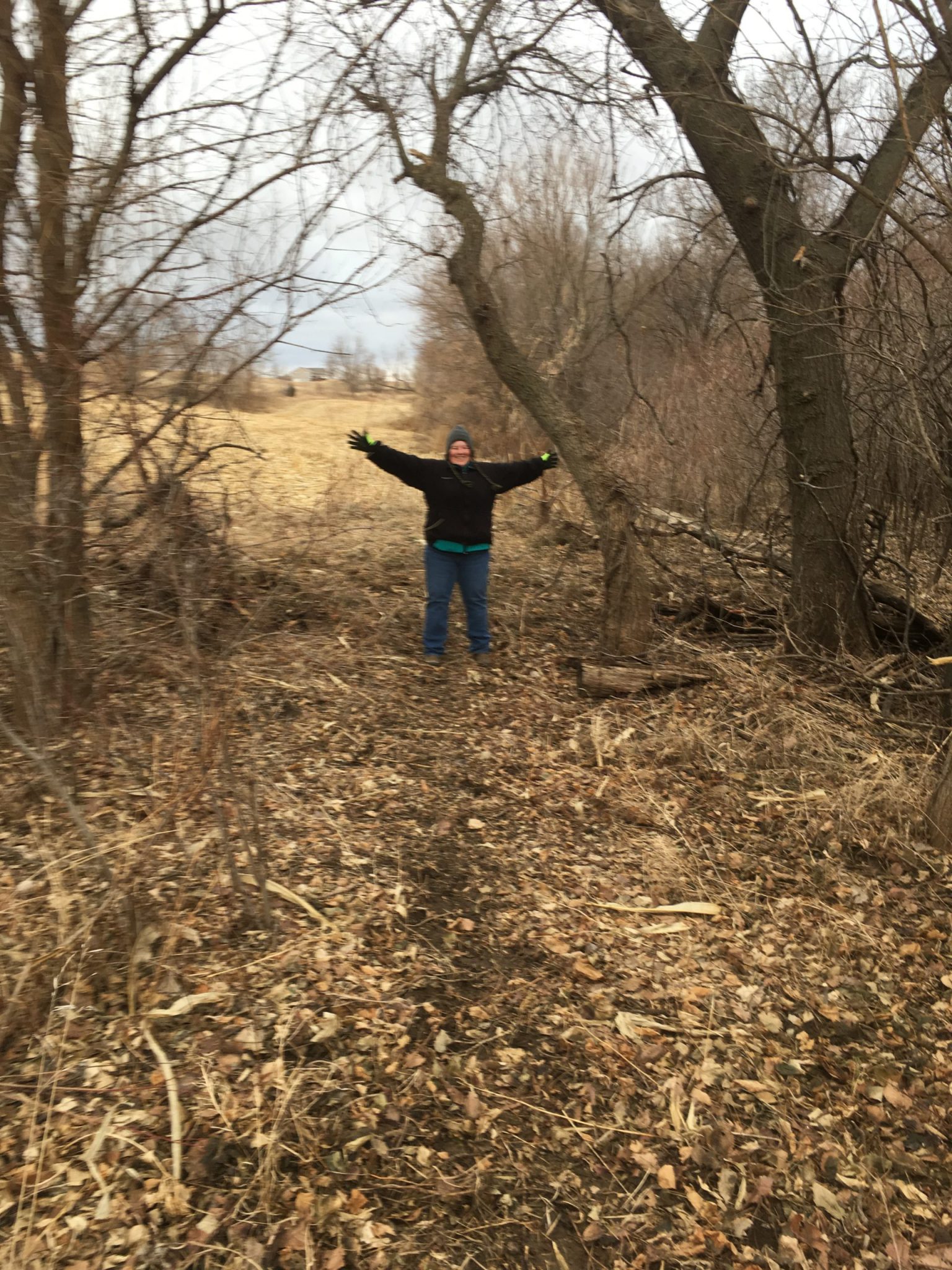 While Jubilee and Cory were out working, they viewed that same big coyote! We plan to chase him on Saturday =)

Saturday we hunted our Cumberland country and it was probably a top 5 day. Imagine this: NO WIND in Cumberland!! Sunny skies, lots of fun people, the hounds were HOT and the footing was good. Some snow on the ground, but it was frozen until the last 30 minutes, when Huntsman Dave made the most excellent decision to turn for home. 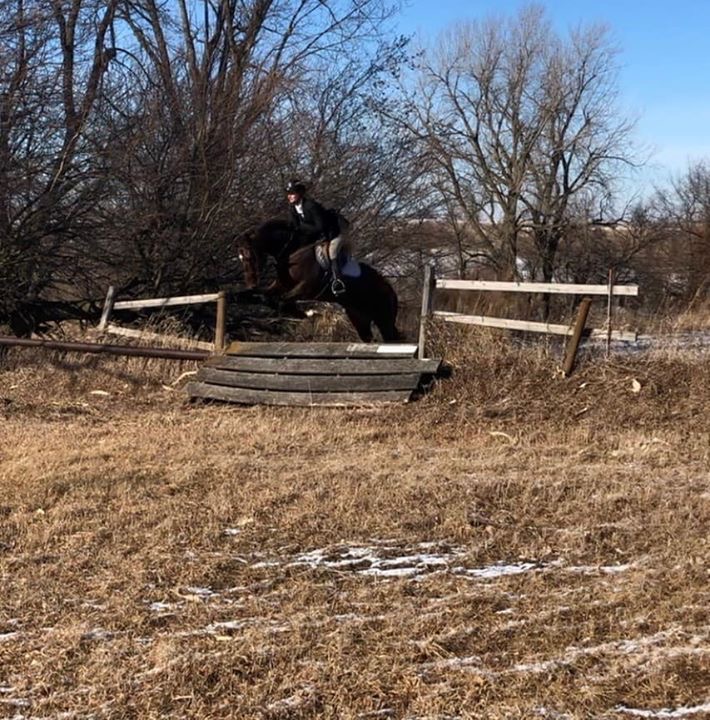 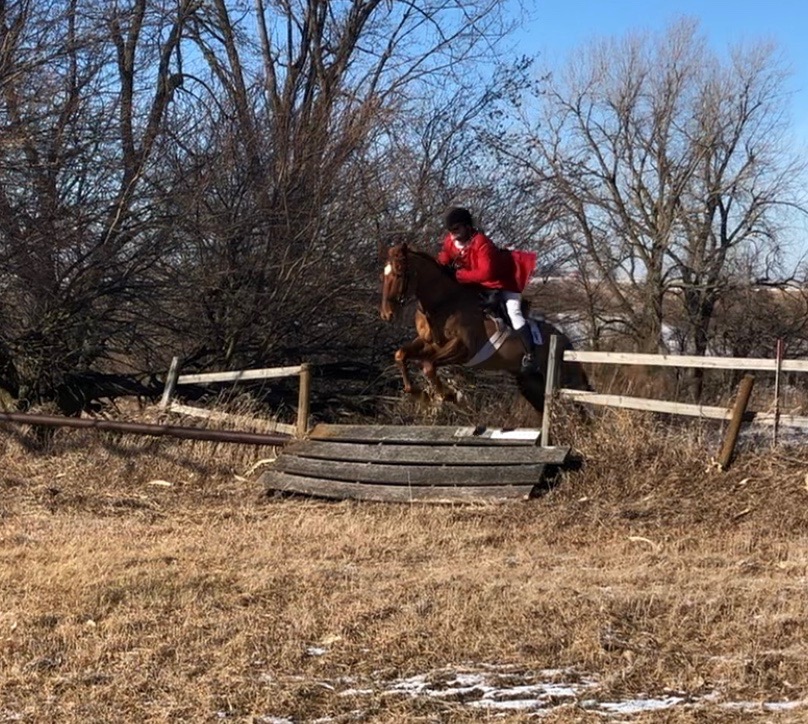 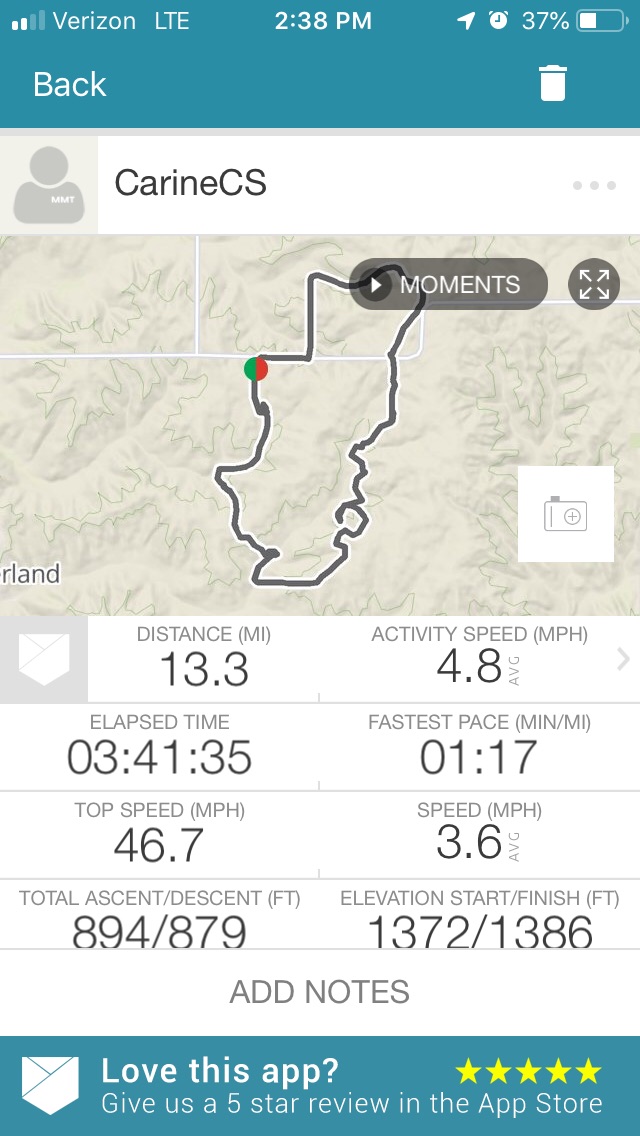 Finally remembered to turn on Map My Tracks

We left south out of Dave (Crazy) and Char Brahms where the last time we hunted Cumberland the hounds struck on a coyote and went on a rip roaring chase. MFH Monte-still in the 4 x 4 since he’s not completely recovered from his surgery. Professional Whip Bre has about 2 months left to go before baby boy Kruger is welcomed into the world xoxox . Deb Robinson is in the 4 x 4 with them.

Crazy is also a road whip and in this country it’s important to have road whips. The hounds can get on a coyote and run fast and hard. Road whips can keep up with the hounds and stop them if they get get close to a highway. Crazy views a coyote, but it’s too far from us.

Bre views a coyote and off we go a huntin’. The hounds make haste and the fabulous hound, Lyse, is the FIRST hound in on the action. She’s amazing. It wasn’t much of the chase, the coyote went quickly to ground.

We headed off looking for more coyotes to chase, the hounds are excited and working hard. We are having so much fun riding across the open country. We viewed 2 bald eagles and scores of deer. Apparently deer hunters were not very successful this past season. 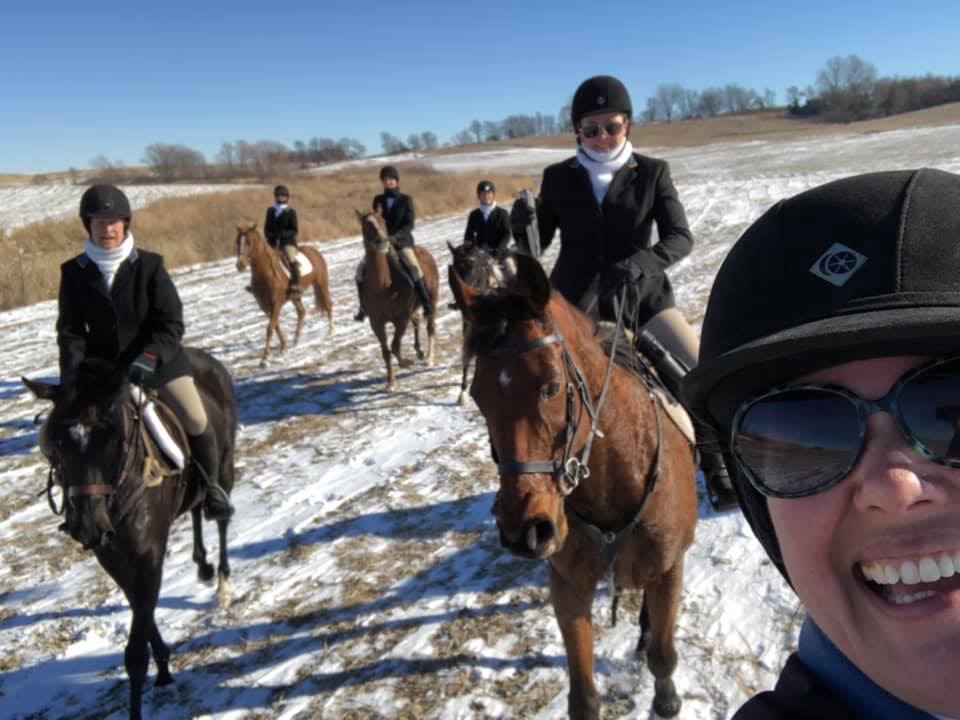 On a personal note, I had to pee so bad, that I was having difficulty riding. I finally jumped off and Monte said I could go right behind the 4 x 4. Deb Robinson said she would stand behind me and cover (my right butt cheek is bigger than the whole of Deb), so I pulled down my pants, bared myself to the world and Monte drives off!!!!

The hounds picked up a line, ran hard in a large circle, lost, picked up and ran hard again and lost again. We didn’t view, so the coyote must have been passing through recently.

We hacked home after a brief whoopee and had another marvelous lunch provided by Judith Butcher and Natalie Mclain. It was an excellent farm to table meal. The chili was made from the beef that Judith and her husband raised and the chicken noodle soup from their chickens and the angel eggs were from their chickens as well. 32 people sat down to enjoy the food and the friendship. 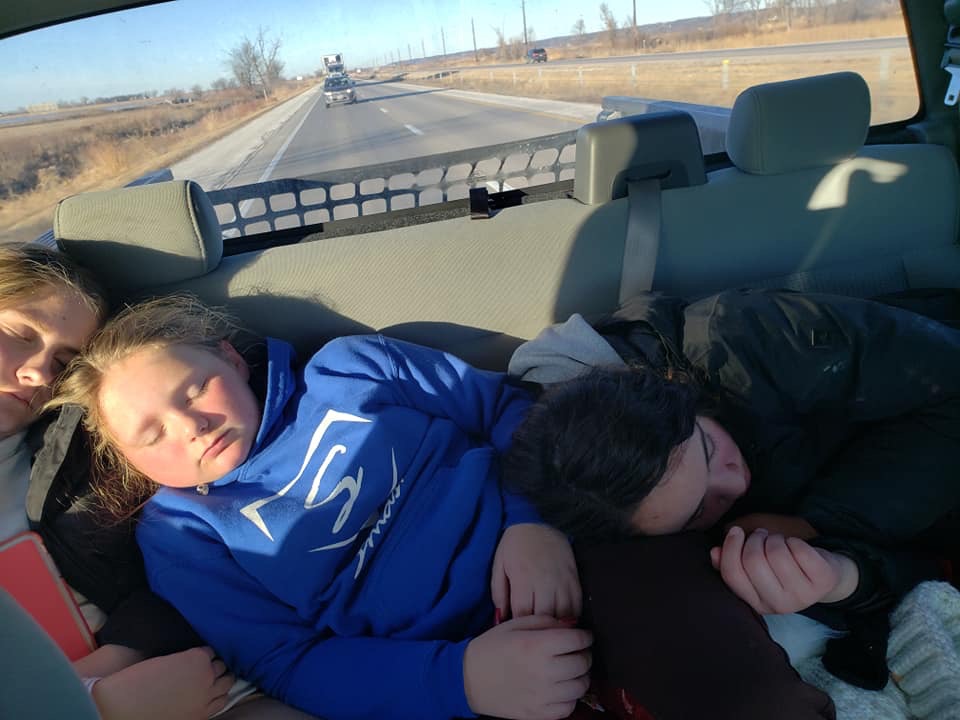 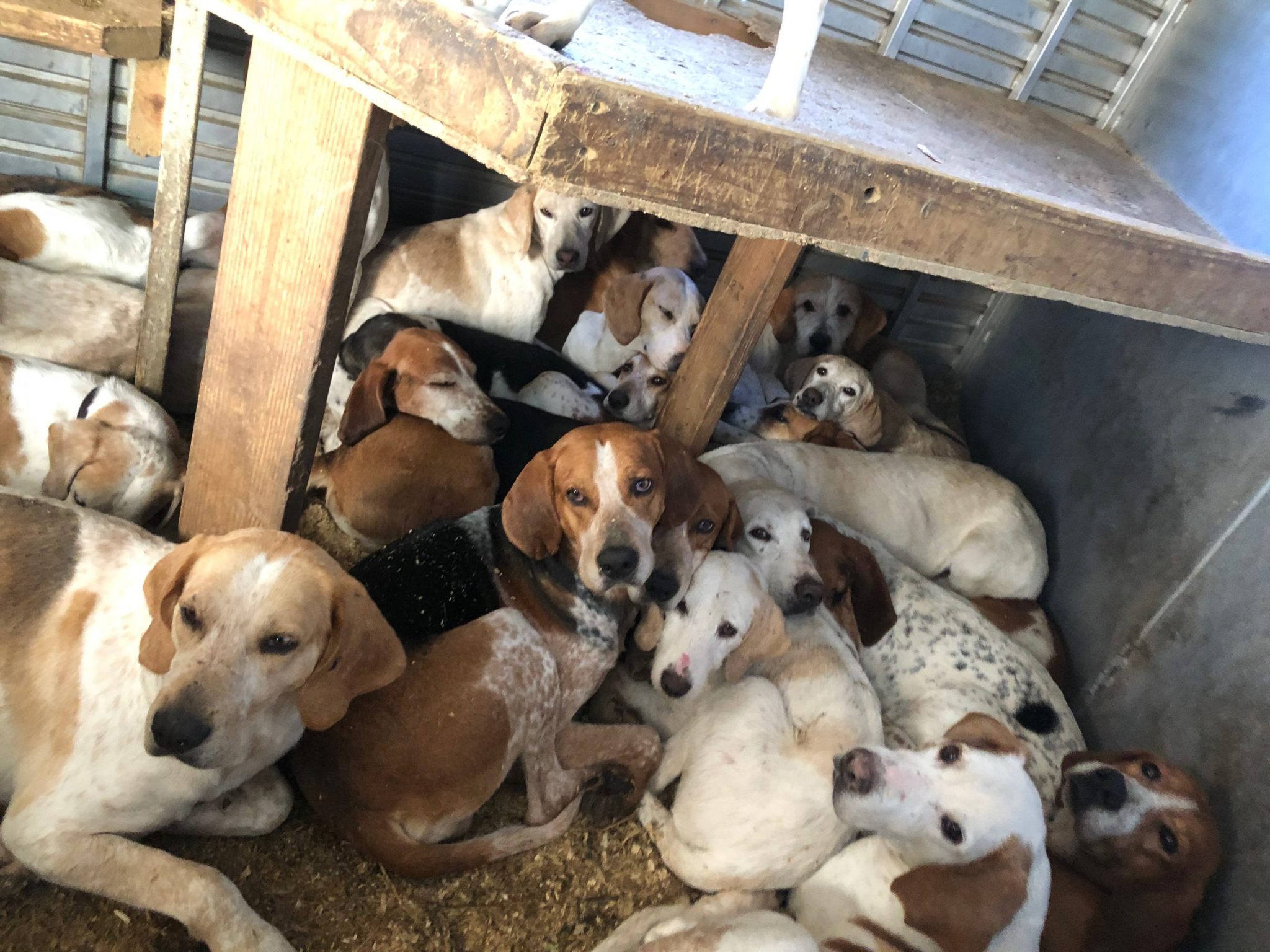 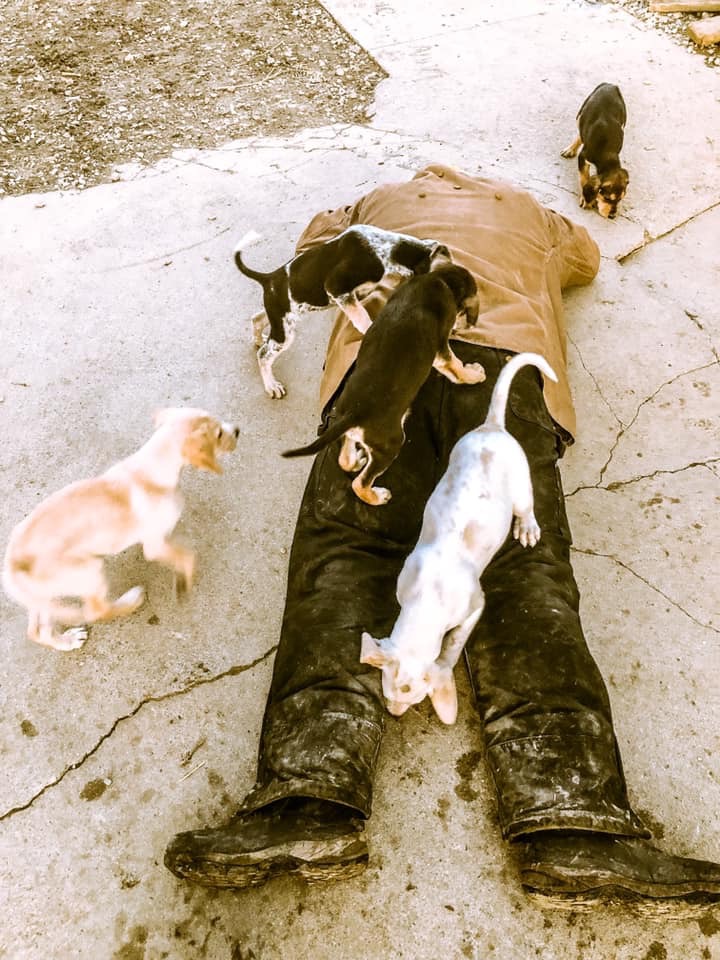 put a fork in the huntsman

This Saturday we are hunting at our kennel country. 11:00 am

Have a safe and wonderful week.