After a LONG hiatus from hunting, we came back with a BANG ! Burwell never lets us down. Always beautiful, challenging and exciting.

The MFHA Hound Performance Trials were originally scheduled for this past spring, but due to the awfulness of the flooding, they were rescheduled for fall.

The Performance Trials is the brain child of Epp and Judith Wilson and with a lot of work by many individuals it is quite fun to participate and compete in. 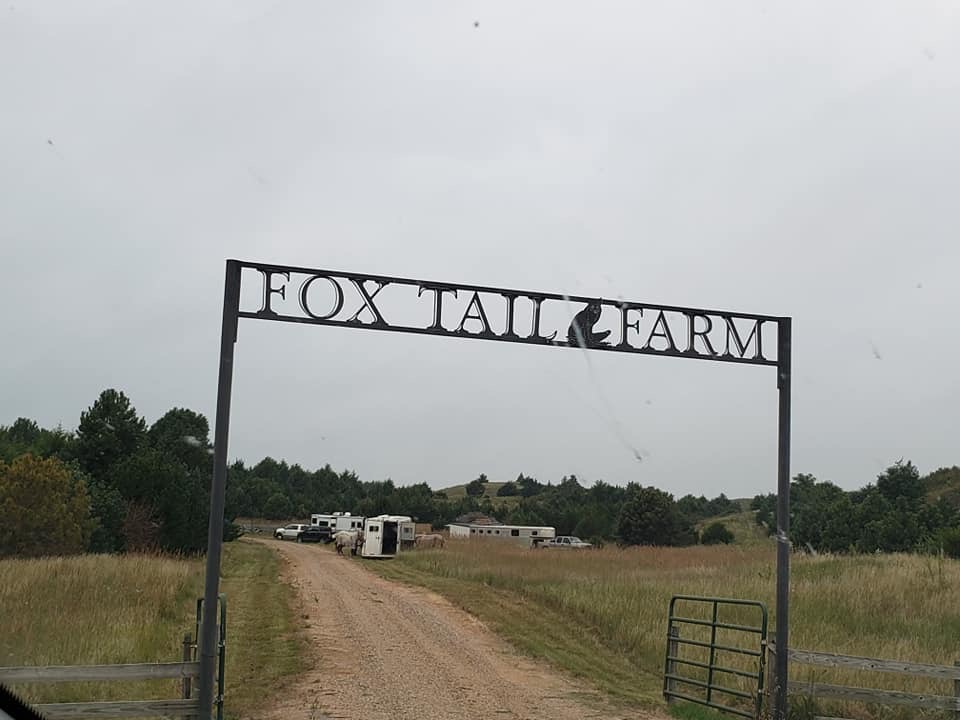 Tuesday we were supposed to hunt from Packards, but rain made the road too difficult from our rigs, so we hunted from MFH Luke & Sam Matranga’s Fox Tail Farm. 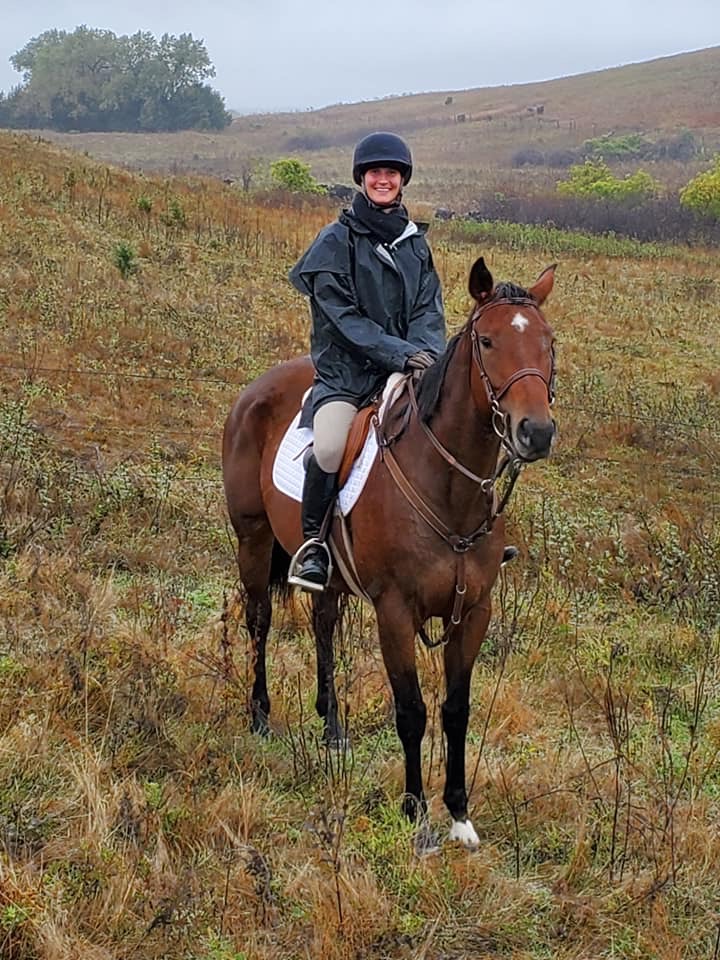 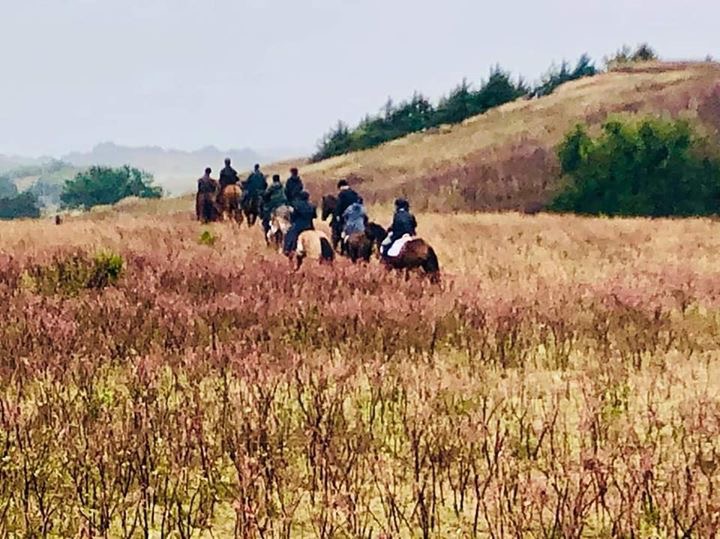 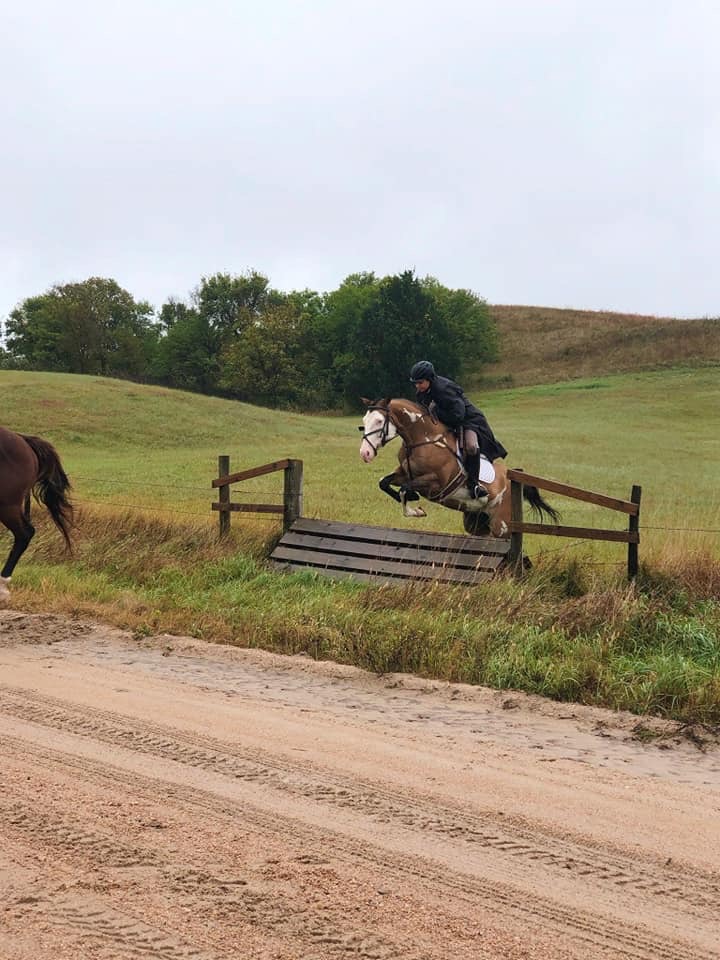 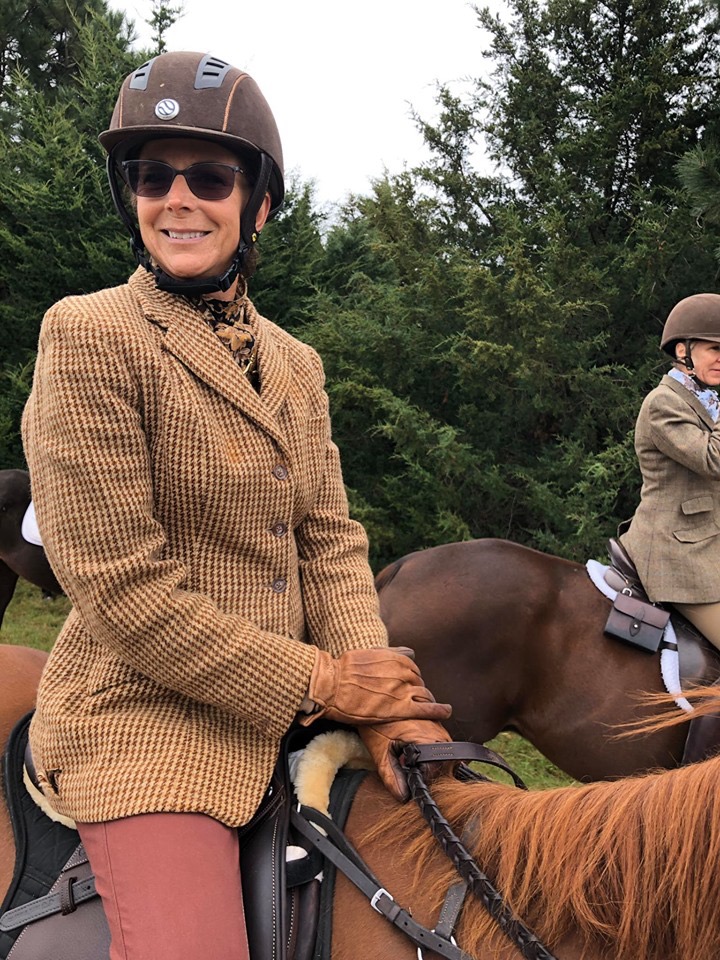 ex-MFH Marcella Norman came from TX to hunt with us. She is a member of NHH 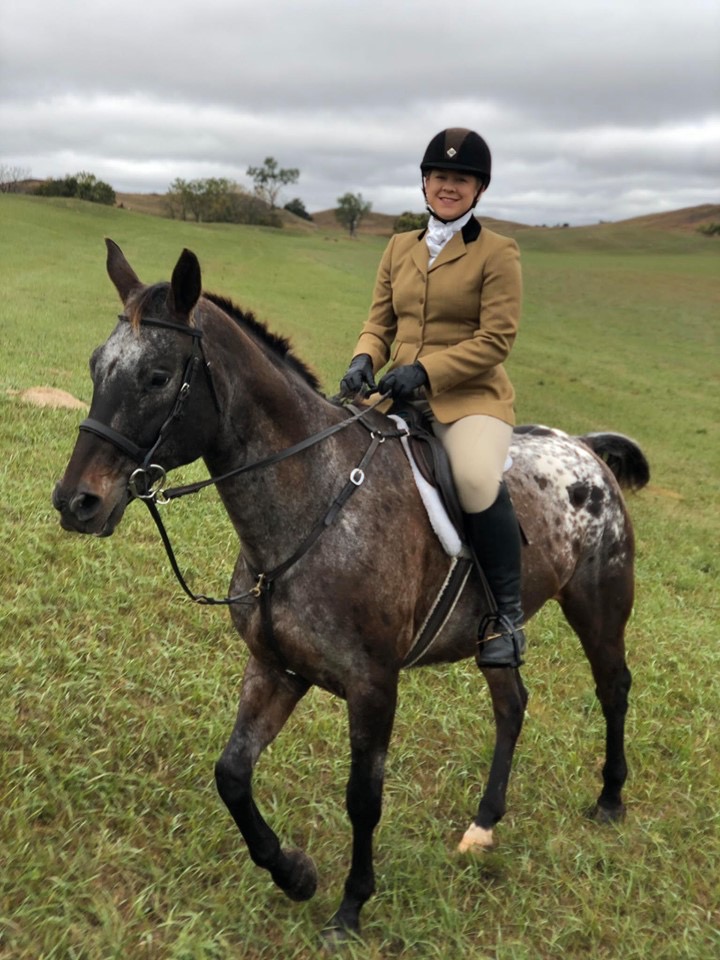 Lauren Kundert came from KY to hunt with us 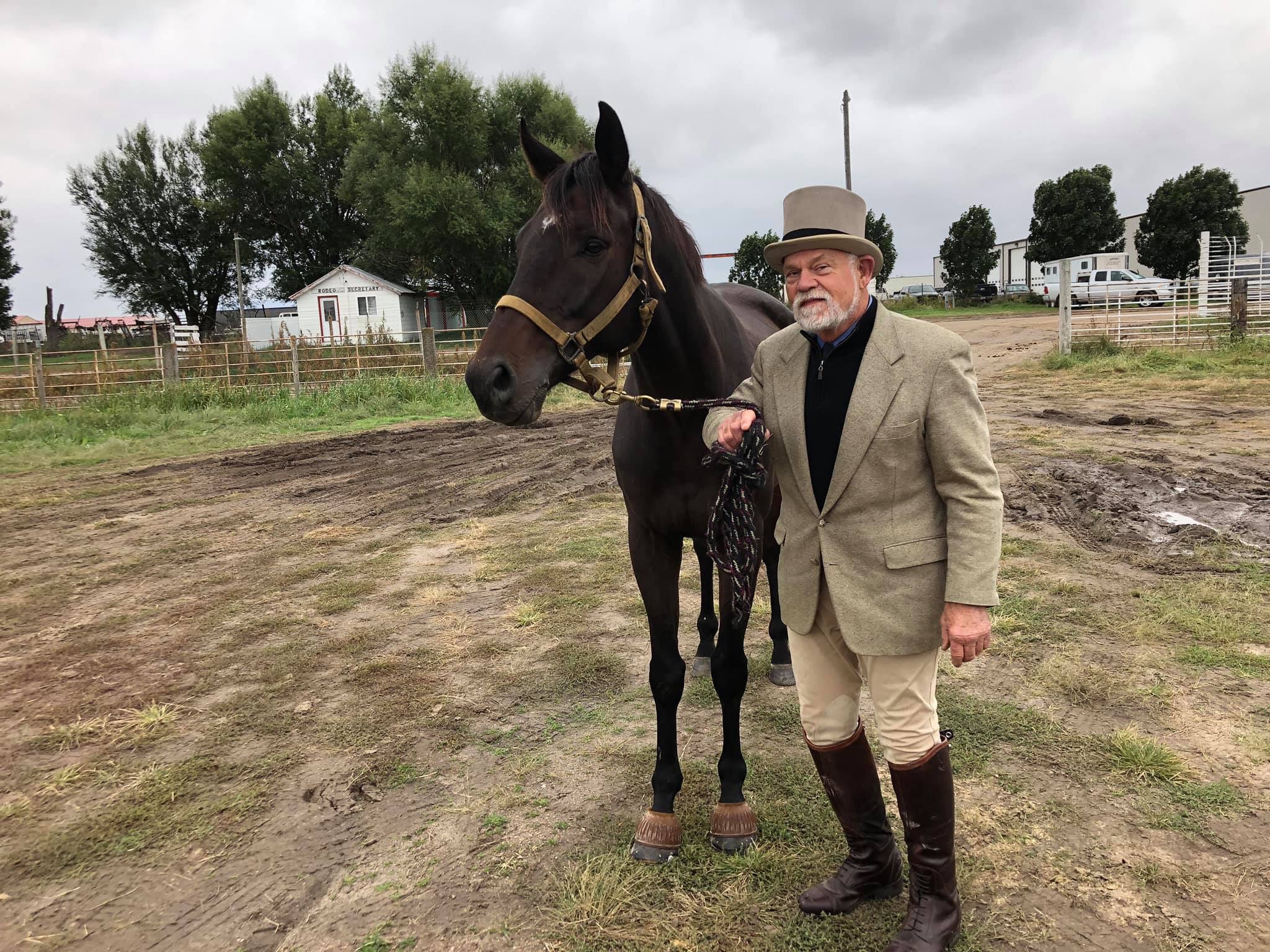 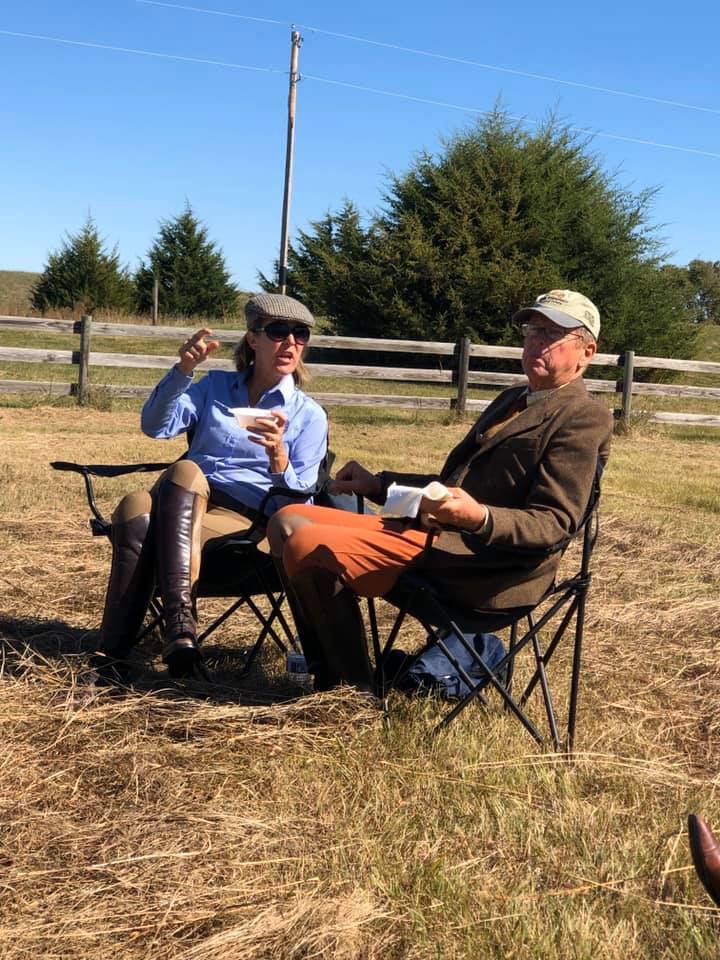 We had 21 riders in the 4 different fields: first, second, third & hilltoppers. The day was misty and grey, but thankfully, not cold. Rain gear was declared and off we rode. The hounds worked well all day and it was So. Much. Fun  watching them  working across the hills and into the canyons. MFH Dave Keffeler viewed a coyote west and the gate group viewed a coyote going east. The hounds weren’t in a position to pick up the scent.

Thursday’s weather was much nicer, thank goodness! We hunted from Matranga’s again since the road was still in poor condition. Once again the hounds worked hard, but not a coyote to be seen.

However, a very LARGE bull decided to join to the hunt. In fact, he cut me off and decided to become the FM and was following closely behind Huntsman Dave. He  was actually kind of funny. He stood off and watched the whips on the hill while we waited for the hounds to voice. The whips were giving us info via the radio. When we turned and started off, he turned and came with us. We stopped. He stopped, again looking around in wonder at his new best friends. When we started trotting and heading down farther into the canyon, he picked up a trot and kept up with us. He eventually got stuck behind some old dead trees and got left behind.

Friday was a down day and some people went riding on the beach at Lake Calamus.Huntsman Dave, Professional Whip Bre Kruger, whip Jubilee Miller, whip Catherine,Dargin, MFH Luke Matranga, Dog Woman Extraordinaire Jenni Toebben and I painted numbers on the 7 hounds that will represent NHH. Did you know that if you grab a male hound by the nether regions they will stand quietly!? who knew? One of the many tricks that Jenni had up her glove. 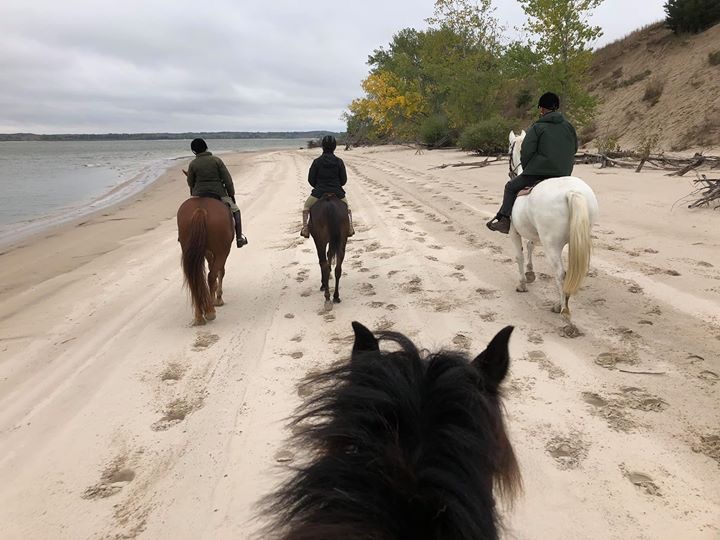 Friday night was the welcome party at the rodeo grounds, which was preceded by the judges meeting which was led by Epp Wilson as he explained to the judges what was expected of them while they were riding: talking into a small recorder that was around their neck, watching the hounds and judging on trailing, full cry, hunting and endurance: all while riding and jumping. Good Luck!

Saturday morning dawned bright and blue with winds forecasting to gust up to 40 mps-and they were correct. By the end of the day I felt like I had a trash can on my head.

Otherwise-It was a FABULOUS day! We hunted from Packards and it was amazing! We viewed 5 coyotes, don’t know how many we gave chase to. The hound work was amazing, my horse was fabulous-as was just about everyone else’s. On a side note, all the Safe Rider Programs and  RIDER and any other event that wasn’t rained out, has really helped our horses and riders get fit and confident.

Angela Murray was our guest Huntsman, our Huntsman, Dave Kruger, rode with her both days to help her around our country, finding coops and let downs.

We covered about 17 miles and our fields dwindled as the horses ran out of gas and the riders wisely called it a day and headed home.

My Rider of the Day was Jay Stockhausen. We were cantering across a field when his horse slipped on a ginormous cow patty and cantered about 3 strides while on his knees. Jay sat up and kept right on riding until his horse recovered. We all applauded and congratulated him on Cowboying up. He retired his horse shortly after that. G was pooped.

I can’t put into words the exhilaration that comes from galloping those hills and working our way down some of those steep inclines. When we would stand quietly (the fields were so quiet-it was wonderful!) on top of a hill, viewing the hounds working either in a canyon or on another ridge, I would hear people speaking in amazement at the beauty of this country. We are so blessed that we have permission to ride across this land.

The Packards had a scrumptious food truck parked in their driveway and we had hot off the grill cheeseburgers and all the fixings.

The results were tabulated and our hounds did so well! Huntsman Dave will be sending out a report with all of the results. NHH was first overall! WHOOHOO!

Sunday we hunted from Matranga’s and it was a beautiful day. As we were leaving Matranga’s, I look on the ridge about 800 yards away and there is this beautiful coyote running west. I tally ho’d and even gave the correct direction! I was validated by Diane Antisdel who viewed him/her as well.

The hounds ran heel and Huntsman Angela gathered them up and we proceeded to hunt 3 more hours, view so many coyotes and even some fox, that we wore out our horses, hounds and riders. We headed home, exhausted, but elated!

Lyse and Ollie have qualified for the National Championships 2020 in the Flint Hills! Thank you Huntsman Dave and Professional Whip Bre for ALL your work to put NHH on the map. A special thanks to the work that our whips volunteer do, as well: Jubilee Miller, Catherine Dargin, Nancy Evans & Helen Smith

Thank you to Diane Antisdel, Stephanie Auck, Bre Kruger and Laura Allen for the use of your pictures. 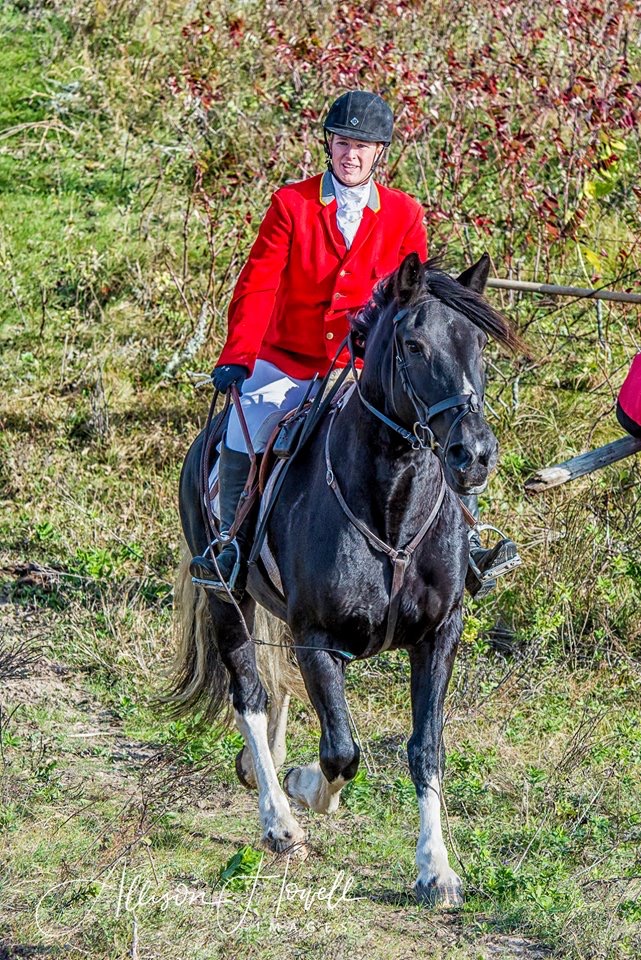 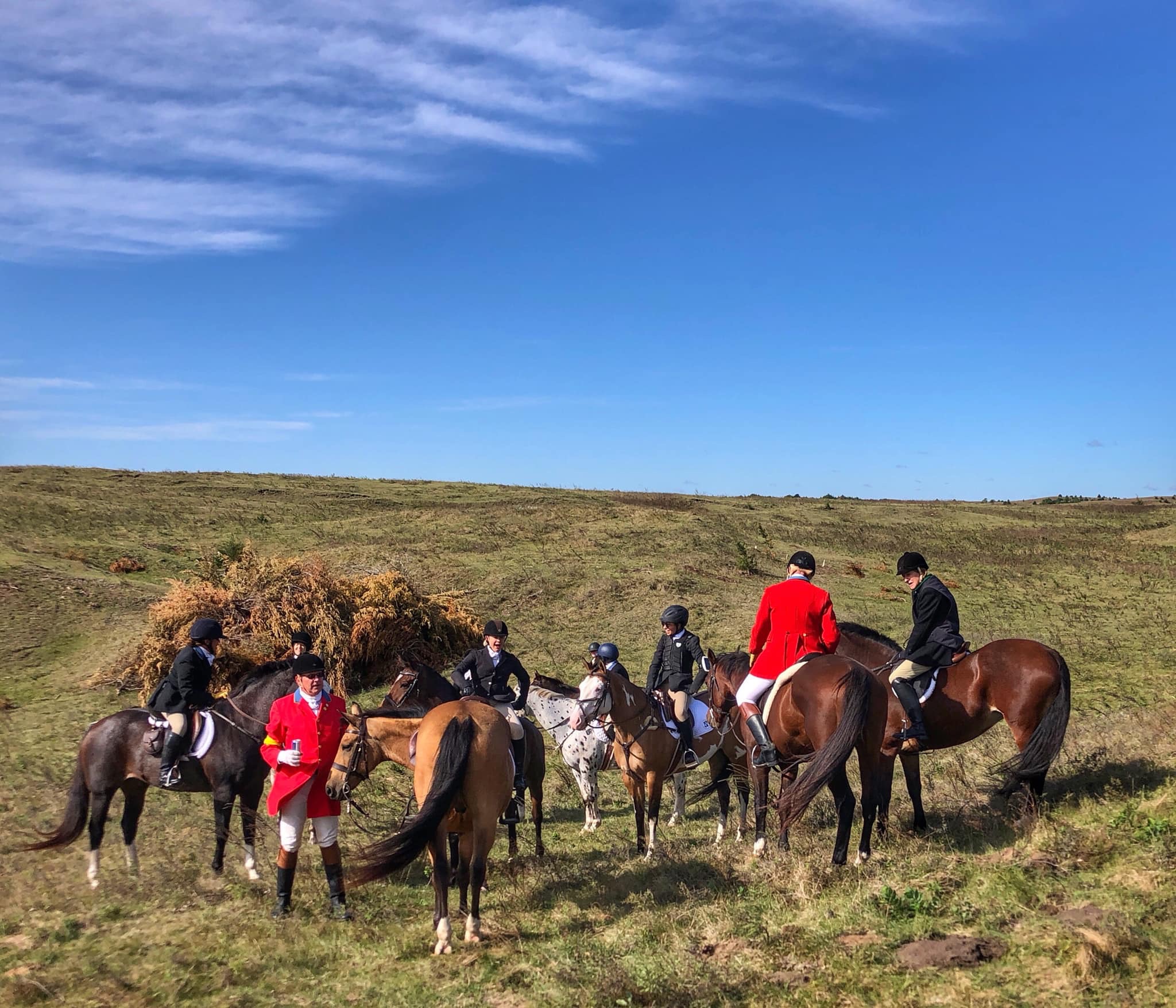 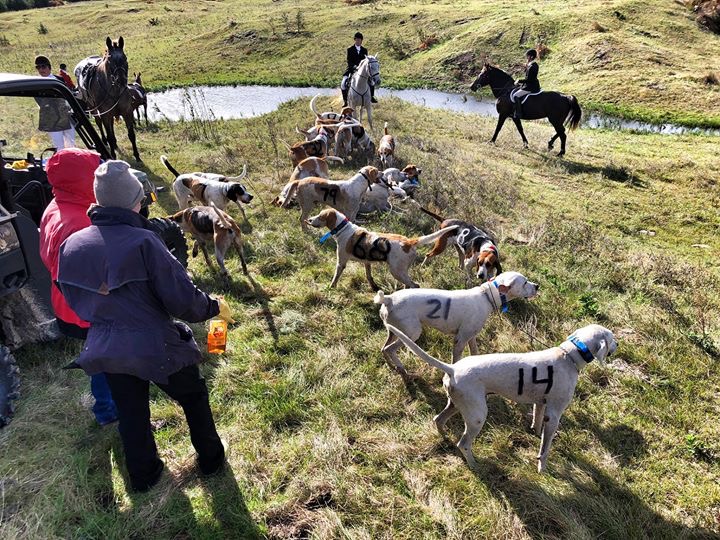 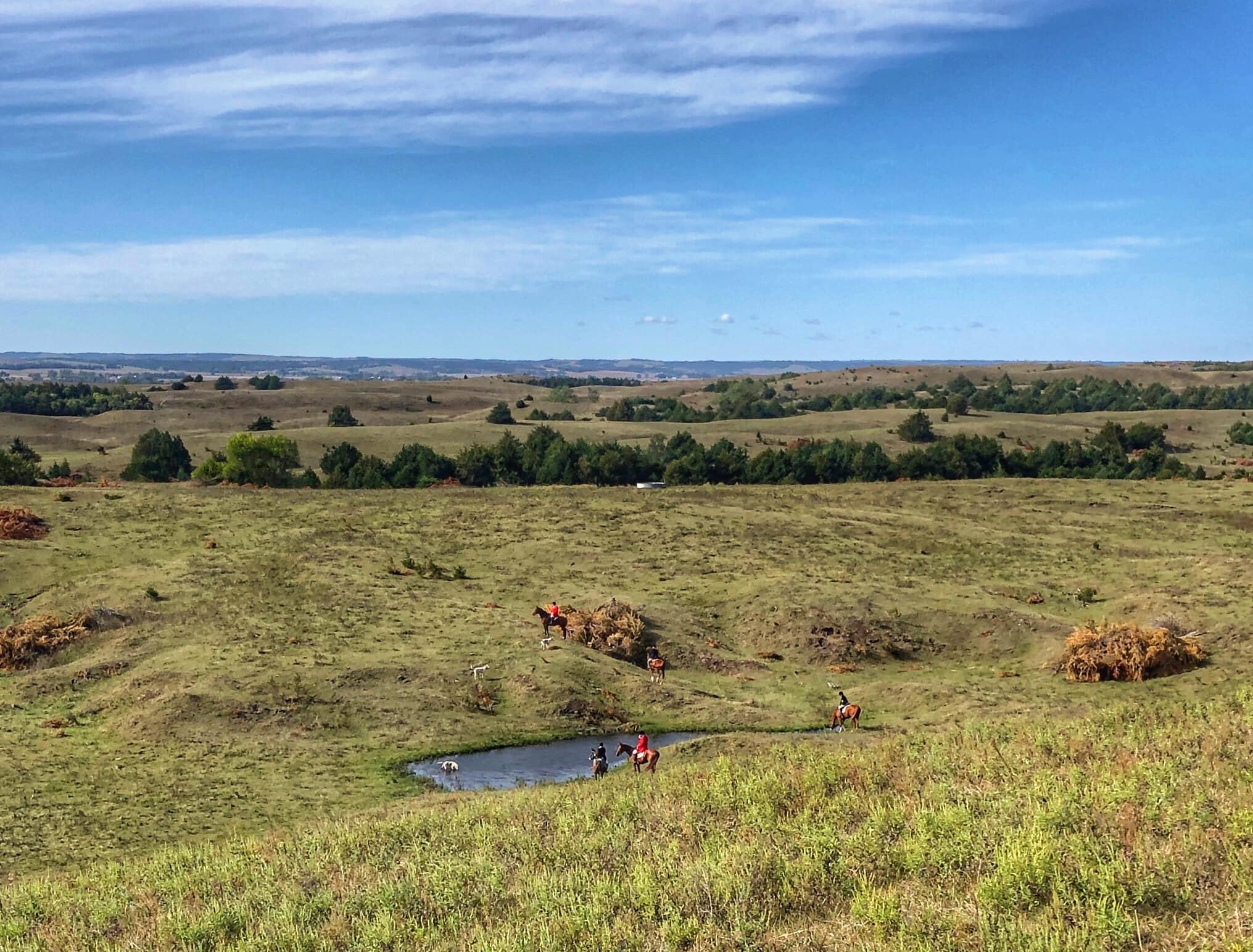 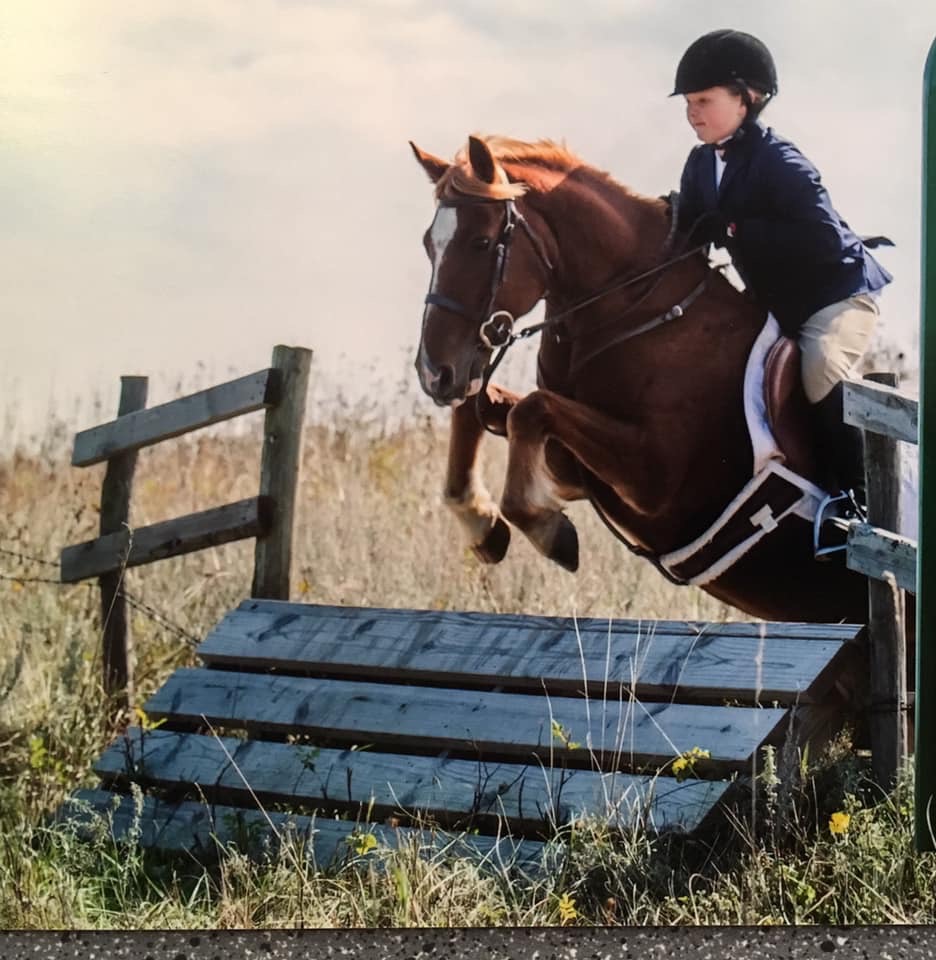