It’s that time of the year again Our 2018-19 season is underway and our first formal hunt was this past weekend  in Burwell. The MFHA, our governing body, held their meeting at Burwell. We had all the dignitaries in town. President Tony Leahy, MFH & Huntsman Fox River Valley, David Twiggs, Executive Director & Keeper of the Stud Book MFHA, MFH Dr. Marvin Beeman and two Vice Presidents with the MFHA. Everyone has heard about the beauty of Burwell and the decision was made to have the meeting in Burwell and to make hunting available for those visiting members who would like to hunt. Keith Rohwer and I had horses tacked up and ready for our guests.
An update on our injured reserve: MFH Luke Matranga is recovering from surgery and is working at regaining full use of his left hand. MFH Dave Keffeler had his other hip resurfaced and is on the road to recovery, as well. He and Luke rode briefly in the gate group, they did party well =) MFH Monte Antisdel had two surgeries this summer, both on his back. He is recovering, but is walking with a cane since he is struggling to have feeling in his feet. I dislocated my ankle at the Ladies Trail Ride this summer and the force of the dislocation broke my fibula and my talas. I had surgery and the surgeon had to break my tibia to work on my talas. 9 screws and some wire and I’m like Humpty Dumpty.  I walked a little too much during the day and needed my crutches by nightfall.
We started Thursday morning at Packards. Cloudline Hounds, MFH Marcella Norman and friends hosted the stirrup cup. MFH Monte Antisdel and Holly Barrett hosted the Whoopee Wagon.
Huntsman David Kruger and the NHH hounds, Angela Murray MFH and Huntsman and the RRH hunted a joint pack 40+ hounds.  It was a beautiful thing to see. Whips were: Bre Osborn, ex-MFH Steve Evans, Nancy Evans, Jubilee Miller and Keith Rohwer.  Tony Leahy, MFH, David Twiggs, Lynn Lloyd, MFH RRH,, both Vice Presidents and about 30 riders all dressed in rain gear rode out looking for game. Jay Stockhausen and Marcella Norman, MFH Cloudline Hounds, TX were the First Flight FM, Beeca Fellman was Second Flight FM, Sherry Jarvis was Third Flight and Board President Holly Barrett was the FM for the Hilltoppers. The game was hunkered down deep into their holes and out of the wind and rain. 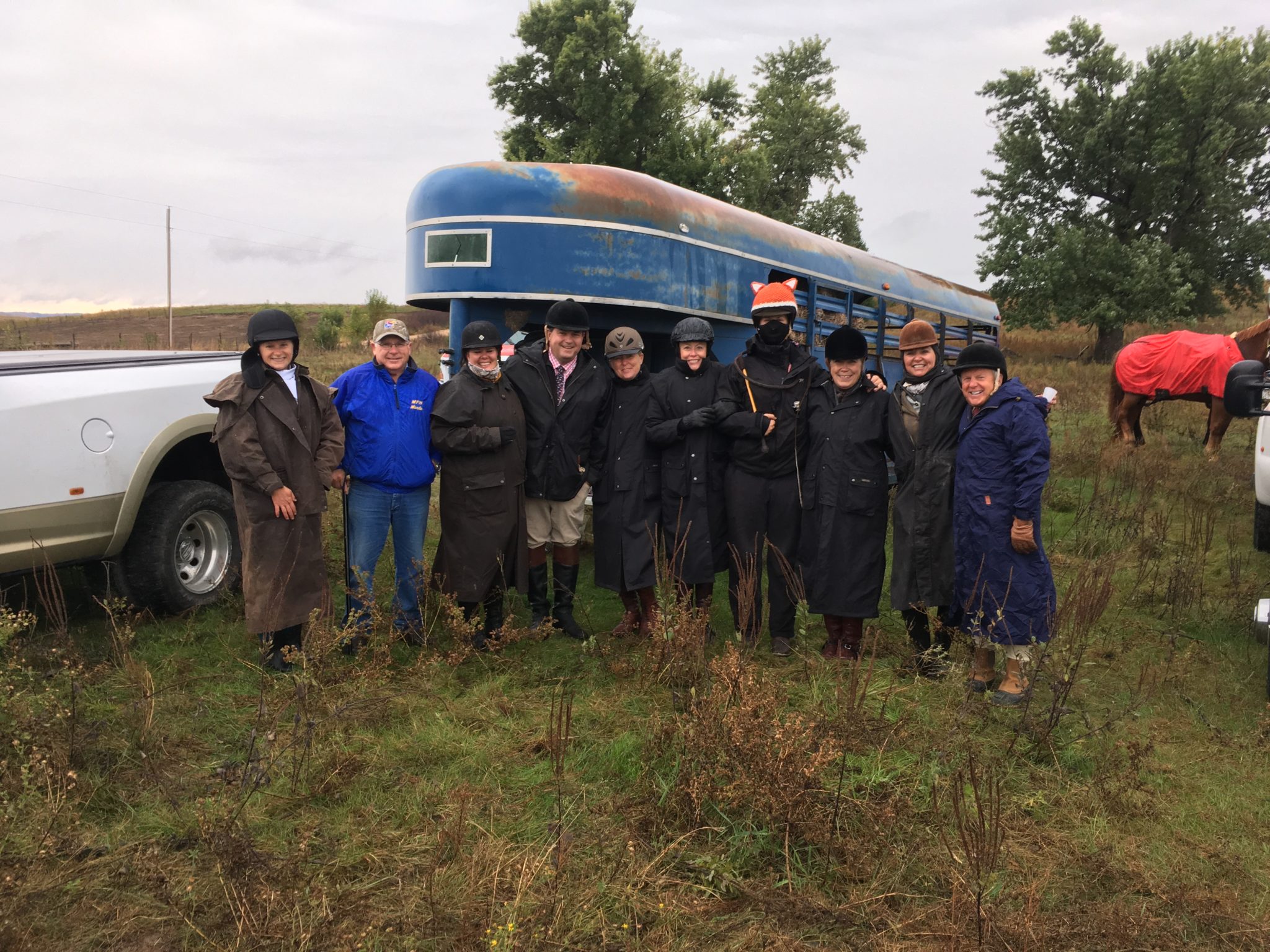 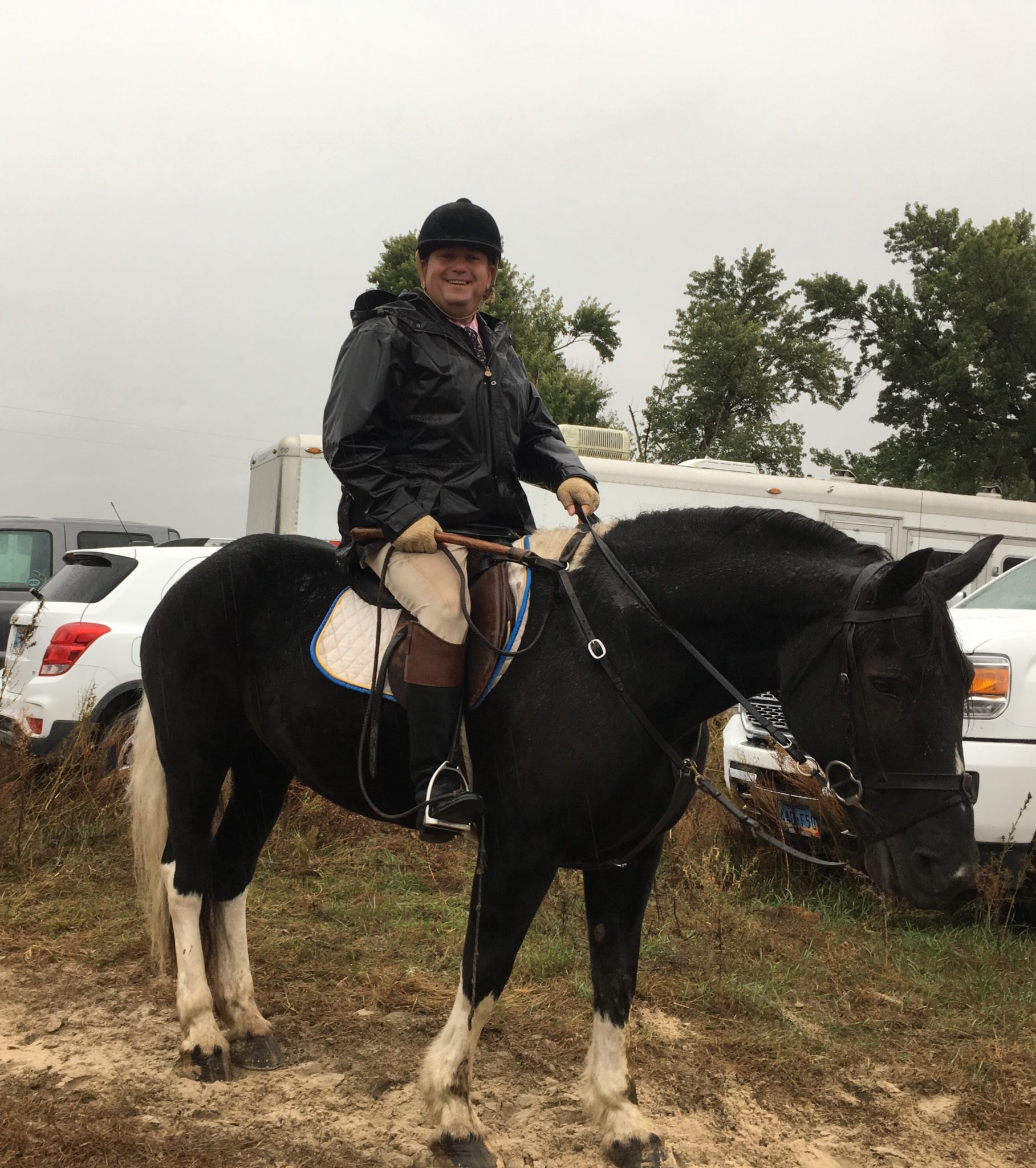 Anne MArquardt and her new mount 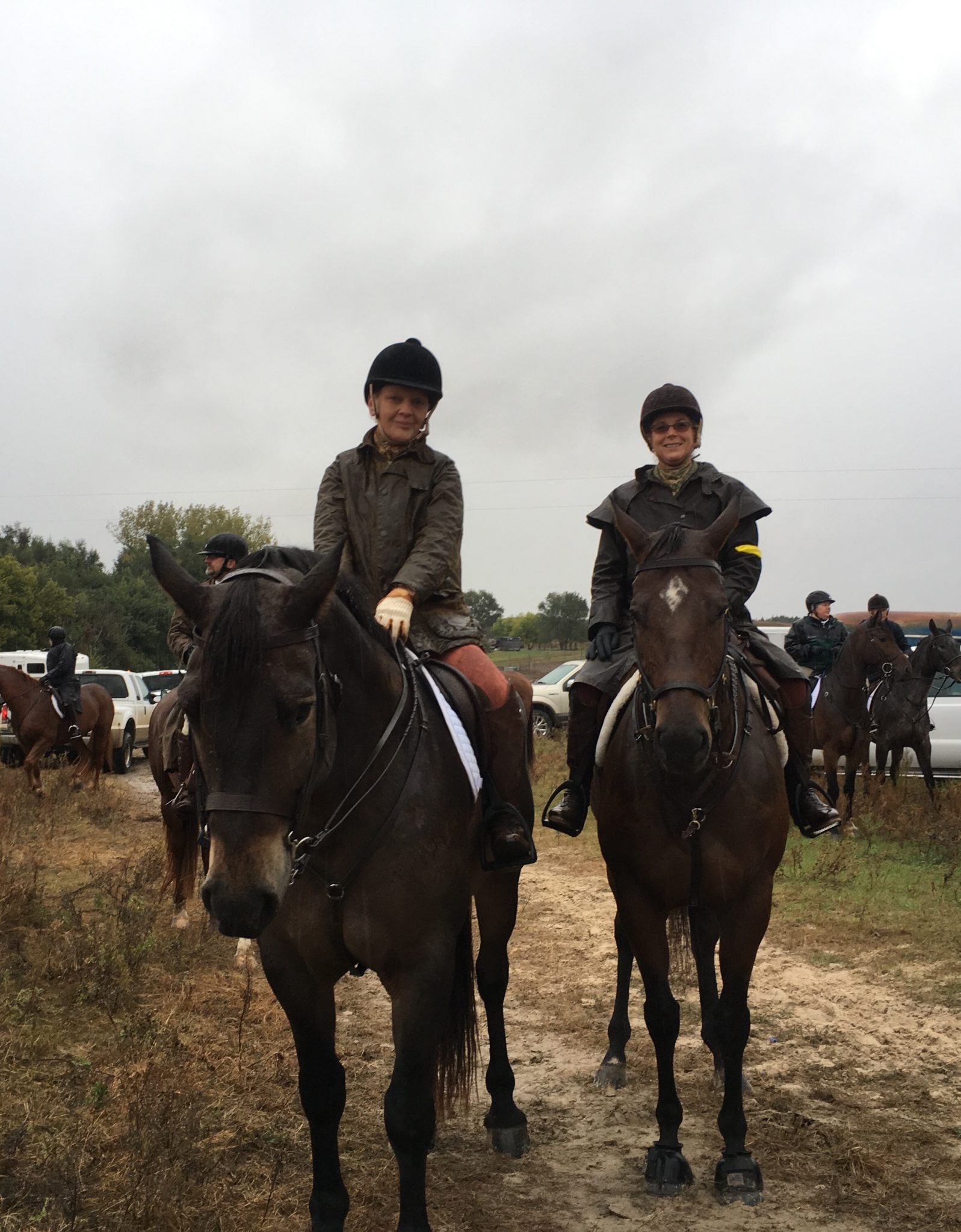 MFH Marcella Norman, Cloudline Hounds, TX (on the right) forgot her friends name on the left
I wasn’t able to ride, so I don’t have a lot to say about what happened.  I do know that I was warm and dry

Thursday night we gathered at MFH Luke and Sam Matranga’s beautiful home. The food and drink were plentiful, the conversation interesting and varied. It’s so fun to talk with people from all over America.
Friday was a beautiful day, the complete opposite of the day before. No wind, blue skies, sunshine, warm

A trail ride at the Calamus was scheduled and about 15 riders had a wonderful time walking the beach, watching the waves roll in, the pelicans fly around and enjoy the beauty of Burwell. 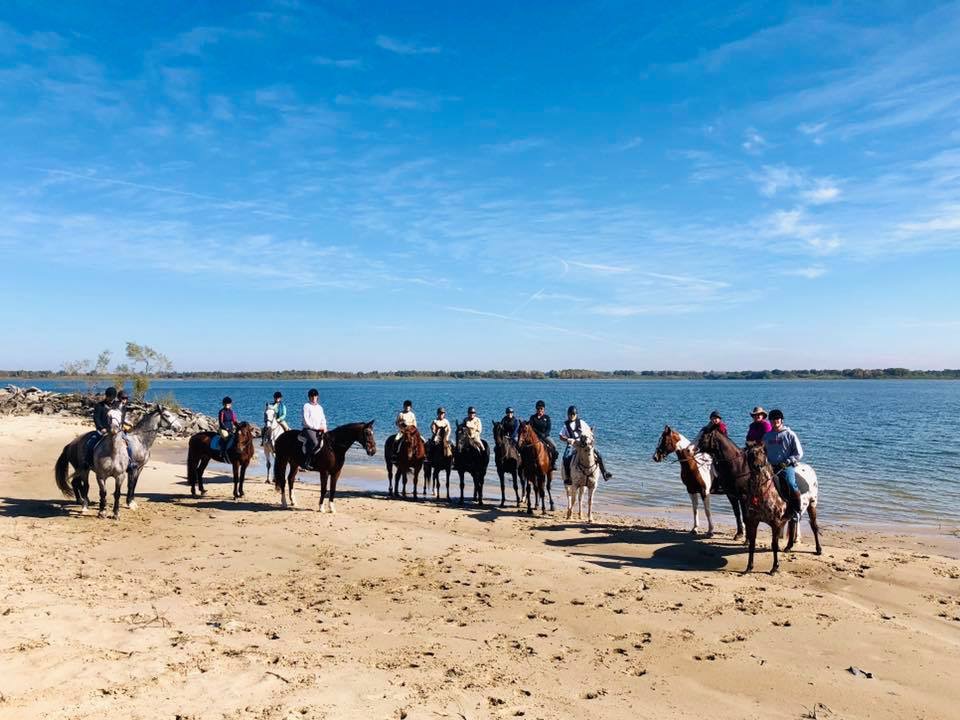 Friday night we enjoyed the Welcome Party at the Rodeo grounds. A big Thank You to MFH Luke and Sam for donating all the drinks (you know that’s a lot!)
Nancy Evans has retired from the NHH shop and Beth Van Dyke is now in charge. She had all the garments on display and was doing a brisk business. Vests, blankets, hats, jackets, rain coats. If you would like to place an order you can email her at redwagz73@yahoo.com
Honorary whipper-in Breanna Orsborn was honored by the Masters by being made a Professional Whip for NHH! She received a standing ovation by everyone! A well deserved honor

She doesn’t receive a salary, but she can now accept gifts on Boxing Day and can wear white breeches and a scarlet coat. However, she can no longer carry a flask 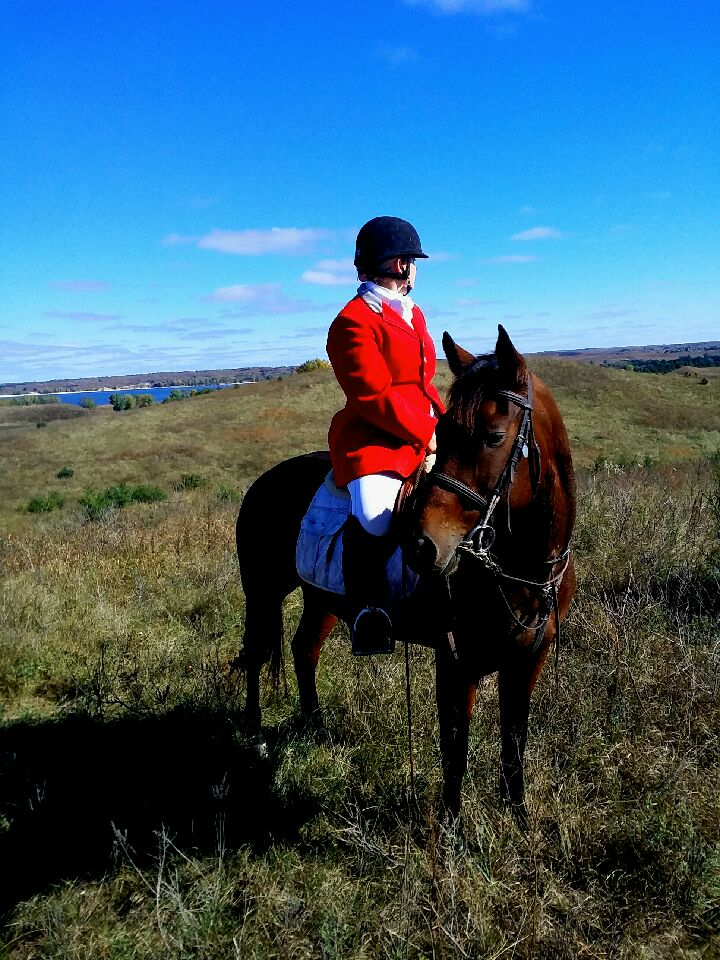 Saturday morning dawned a beautiful day and as I was loading my dogs up in the truck to go feed the horses, the coyotes were singing!

Hunting was scheduled for a 10 am departure. We drove into Luke and Sam’s ranch at 8:30 and it was already packed! I managed to find a spot for my 6-horse trailer by cutting Mark Hanson off

The Farm at Butterflat Creek hosted the stirrup cup and the Whoppee Wagon. New member Judith Jolene brought these lovely rolls. MFH Lynn Lloyd, RHH walked around welcoming riders and carrying baskets of breakfast foods.
Spirits were high, 40 + hounds, huntsman’s David Kruger and Angela Murray led the 60 + riders south out of the Matranga’s. Professional Whip Bre O, Honorary Whips: ex-MFH Steve Evans, Nancy Evans, Jubilee Miller & Keith Rohwer. Jay and Marcella led first flight, Aloma Moncrief led the second flight, Becca Fellman led third flight and Holly once again led the hilltoppers.
There were multiple coyotes viewed, as well as deer. Not sure why there were so many deer moving, we’re about a month away from the rut. The bucks were already starting to gather up their women. There were multiple coyotes viewed and each flight were able to view!
Landowner Raleigh Bolli led the vehicles around the roads and into the country, giving us great views of the riders. 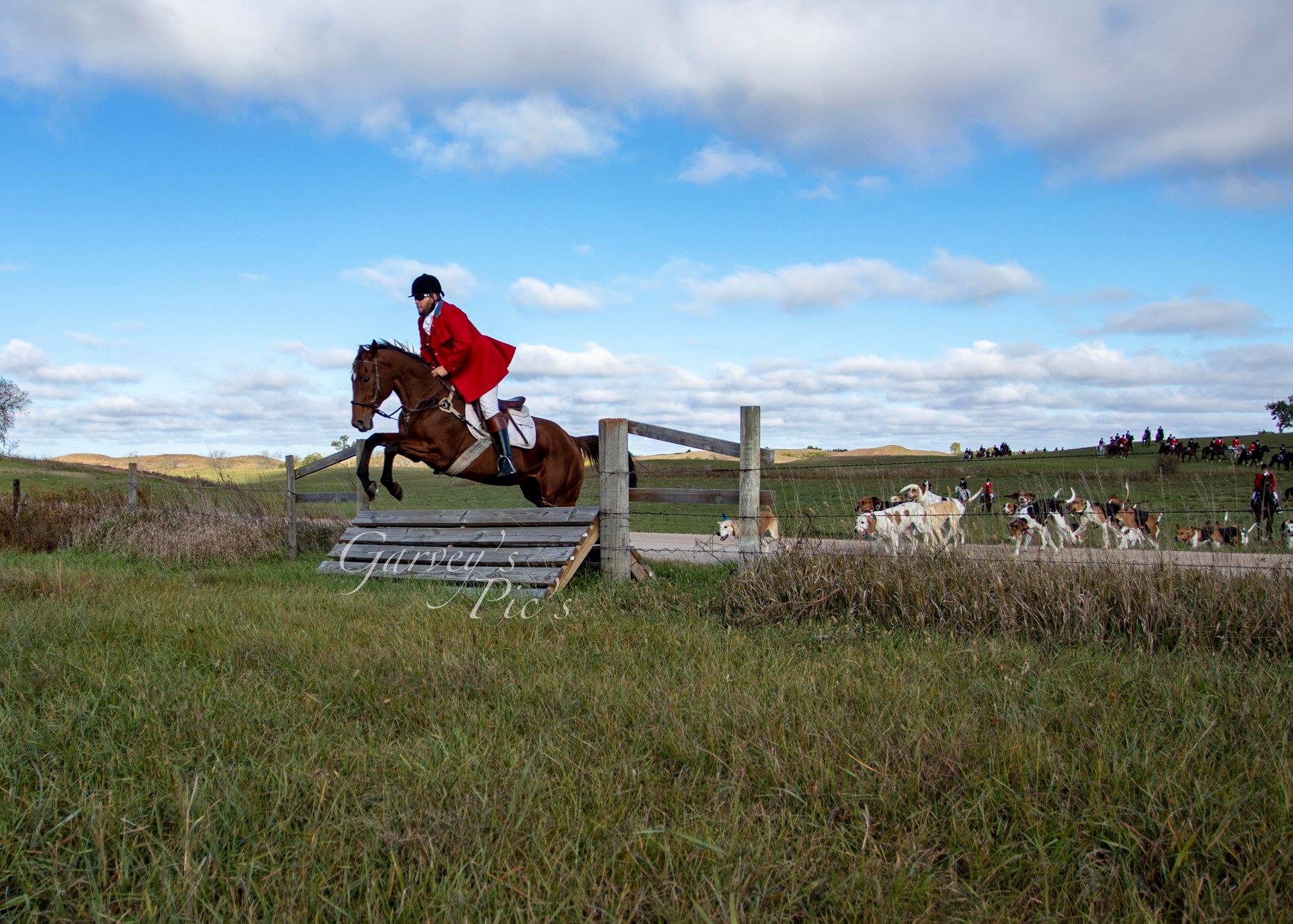 Huntsman David Kruger  Thanks to Devin Garvey for all the beautiful pictures! 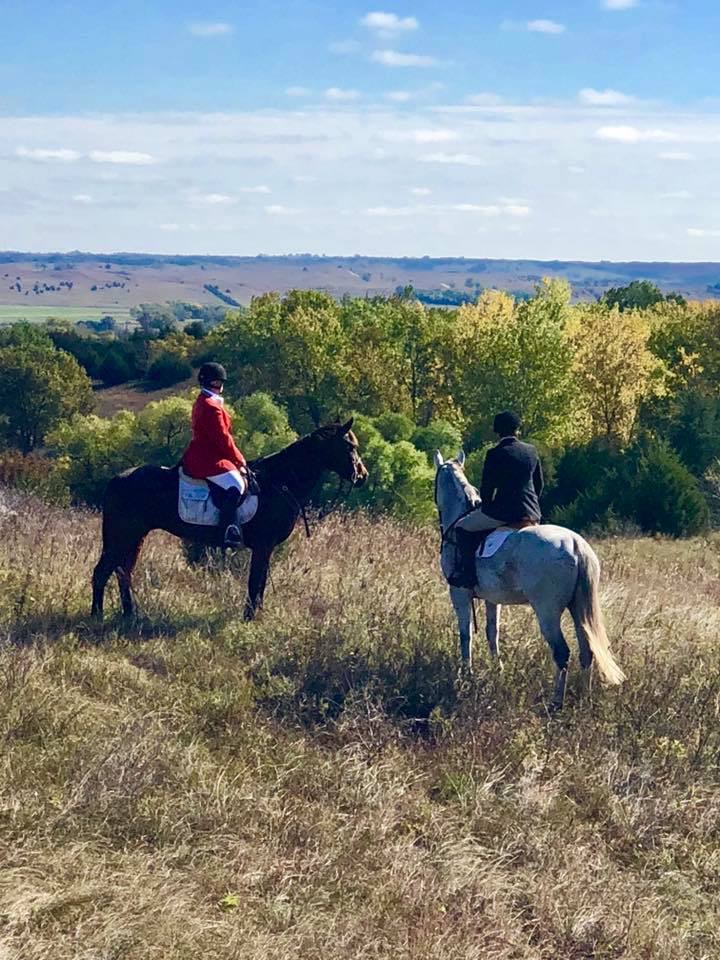 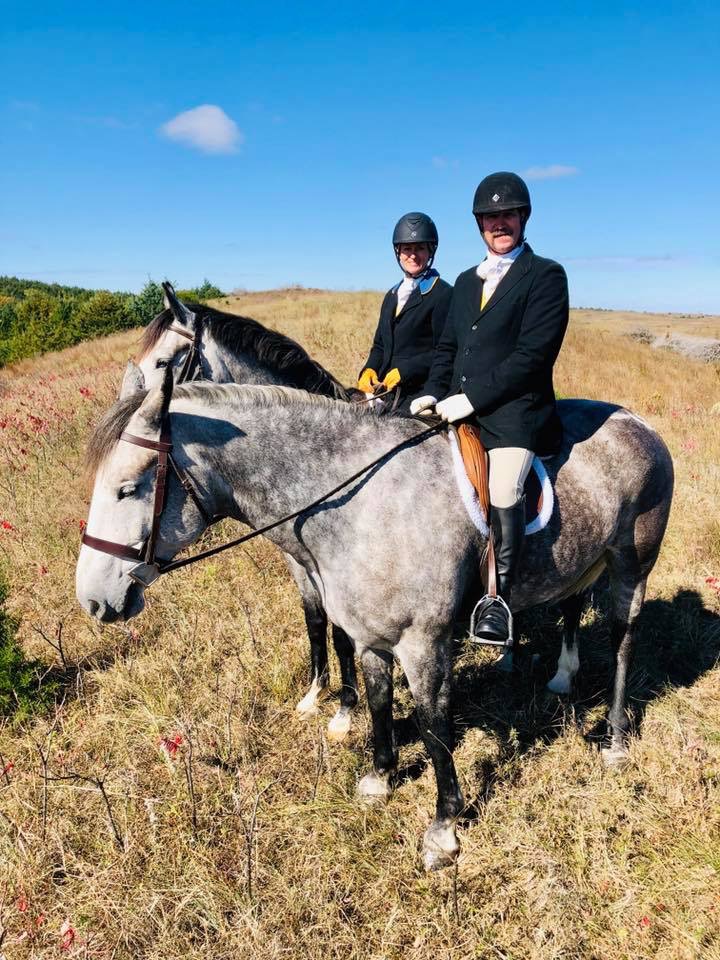 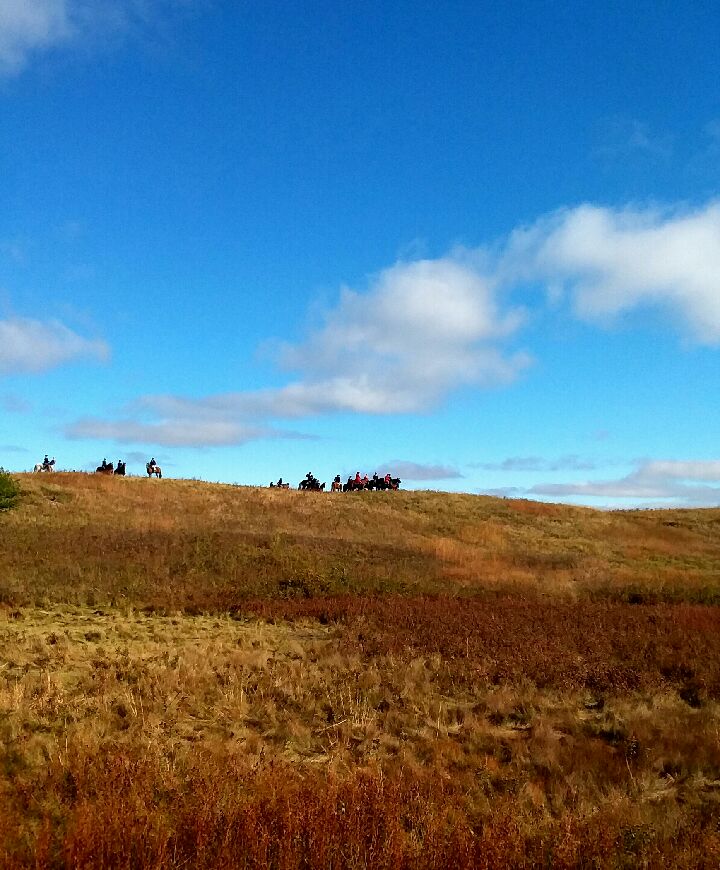 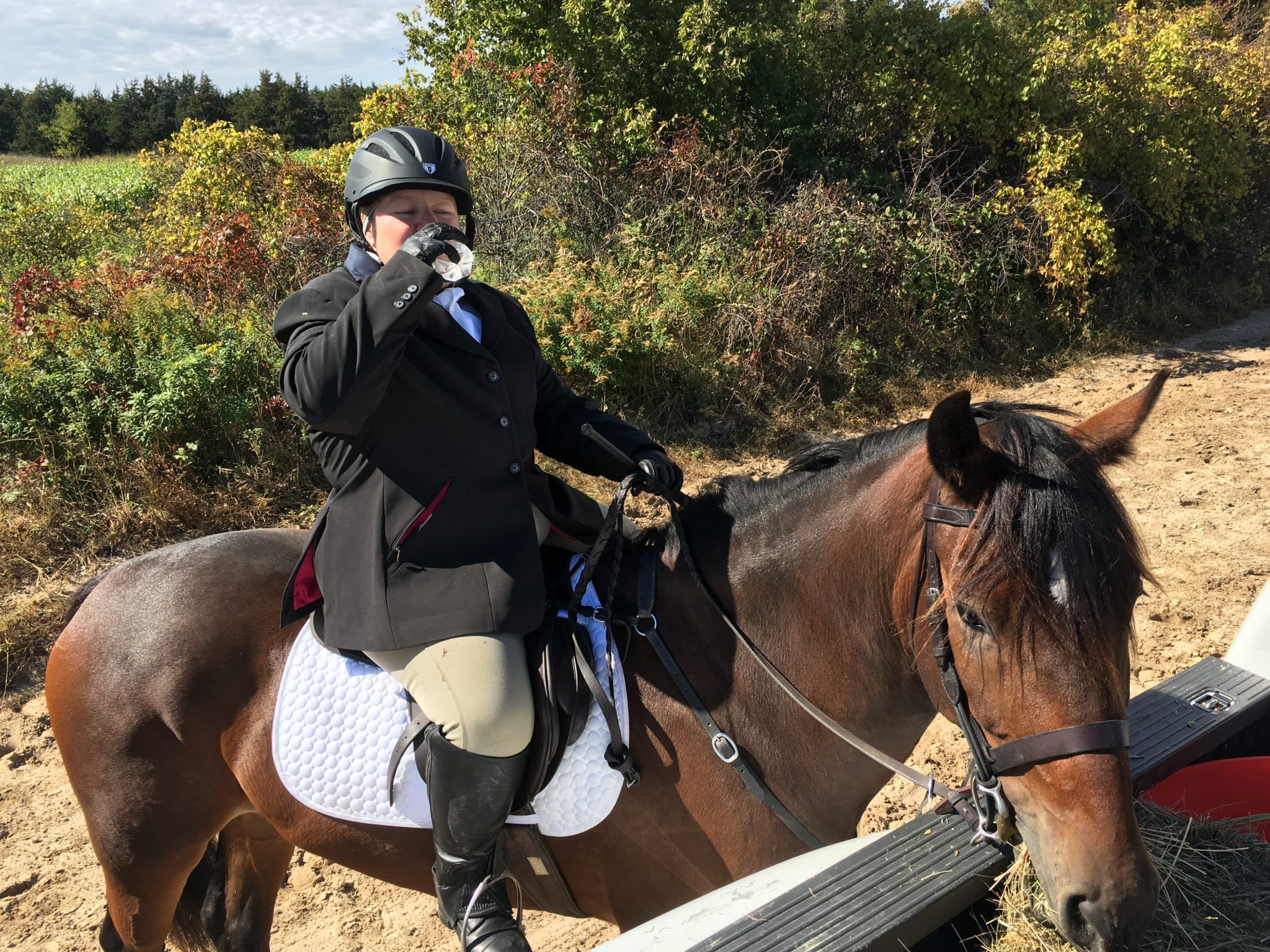 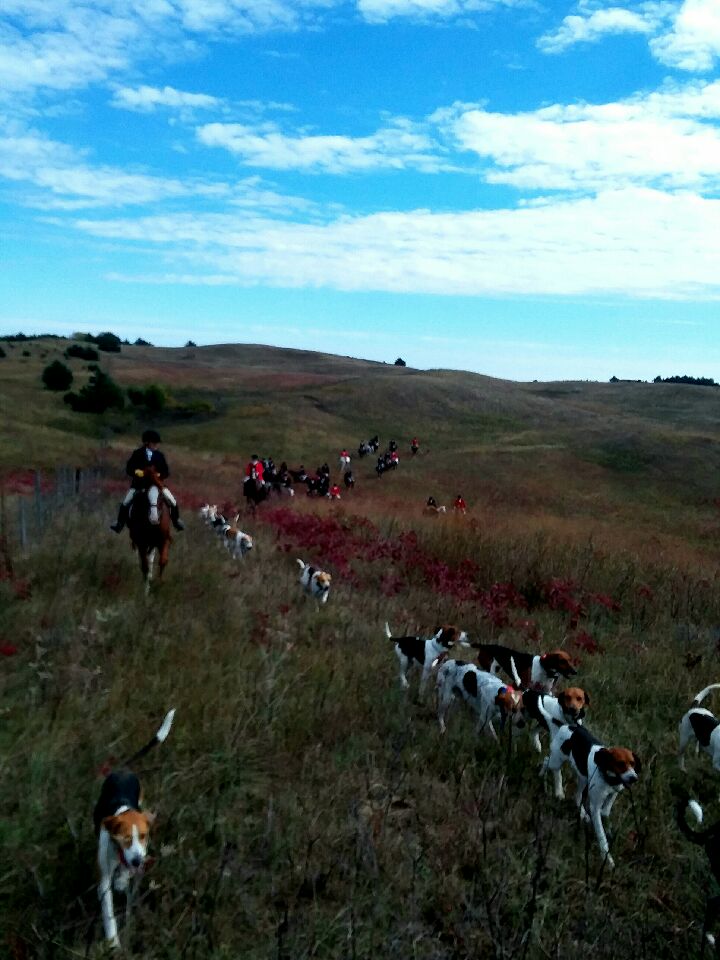 Field surgery. Several hounds had some cuts that required stapling. The thought was they were trying to dig a coyote out of a hidey hole and sustained cuts on machinery. They all had the same cut.
Saturday night was another party at Luke and Sam’s. The food was once again fabulous as well the conversations. It was so fun to strike up with conversations with different people. I had a great time talking with Angela Murray and David Twiggs about the great things happening around the country with other hunts. 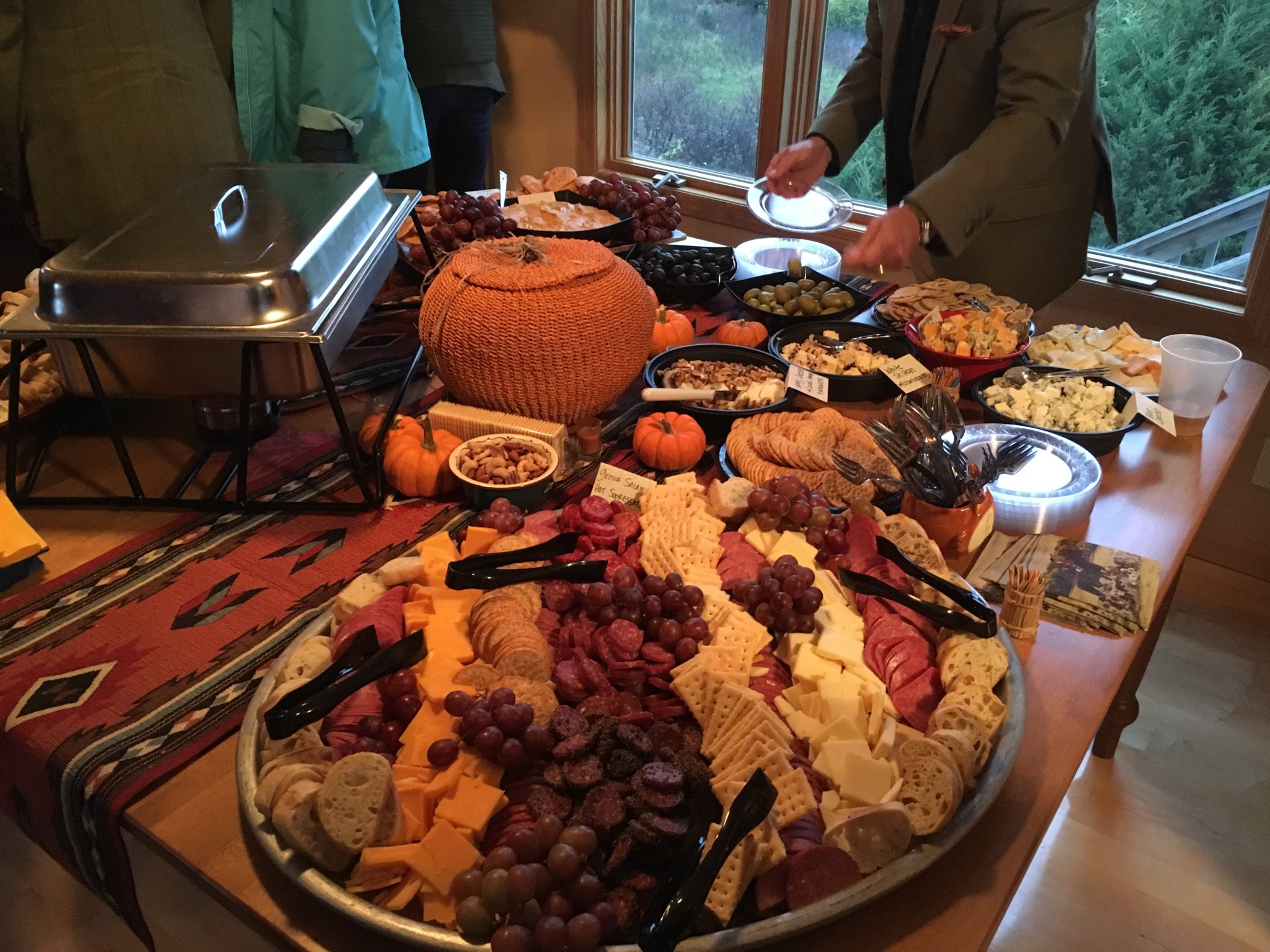 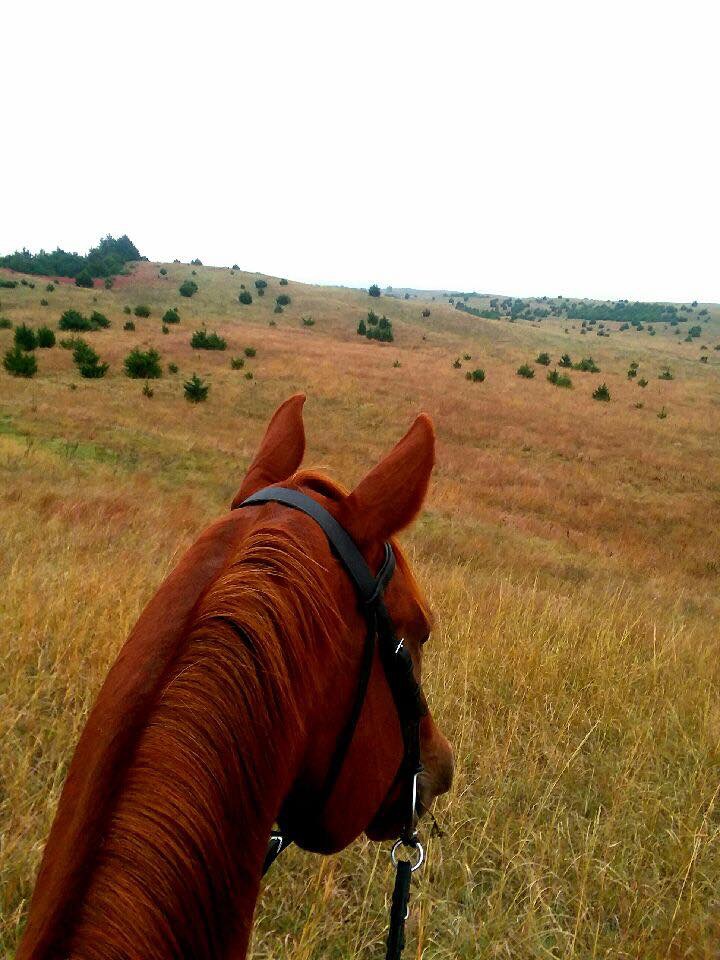 view from whipper-in Jubilee Miller
All was going well and the hounds gave good voice as the field watched the tall grasses sway with the movement of the hounds giving chase-unfortunately it was a porcupine.

Huntsman Dave carried the hounds back to the trailers where 7 pairs of pliers awaited him.  New members Lauren Kundert, Krista Brown and her boyfriend Danny helped Huntsman Dave, Bre, and Jubilee tranquilize some of the hounds and pull all the quills out of their muzzles, mouths, tongues….
We finished the weekend off with beef and noodles! 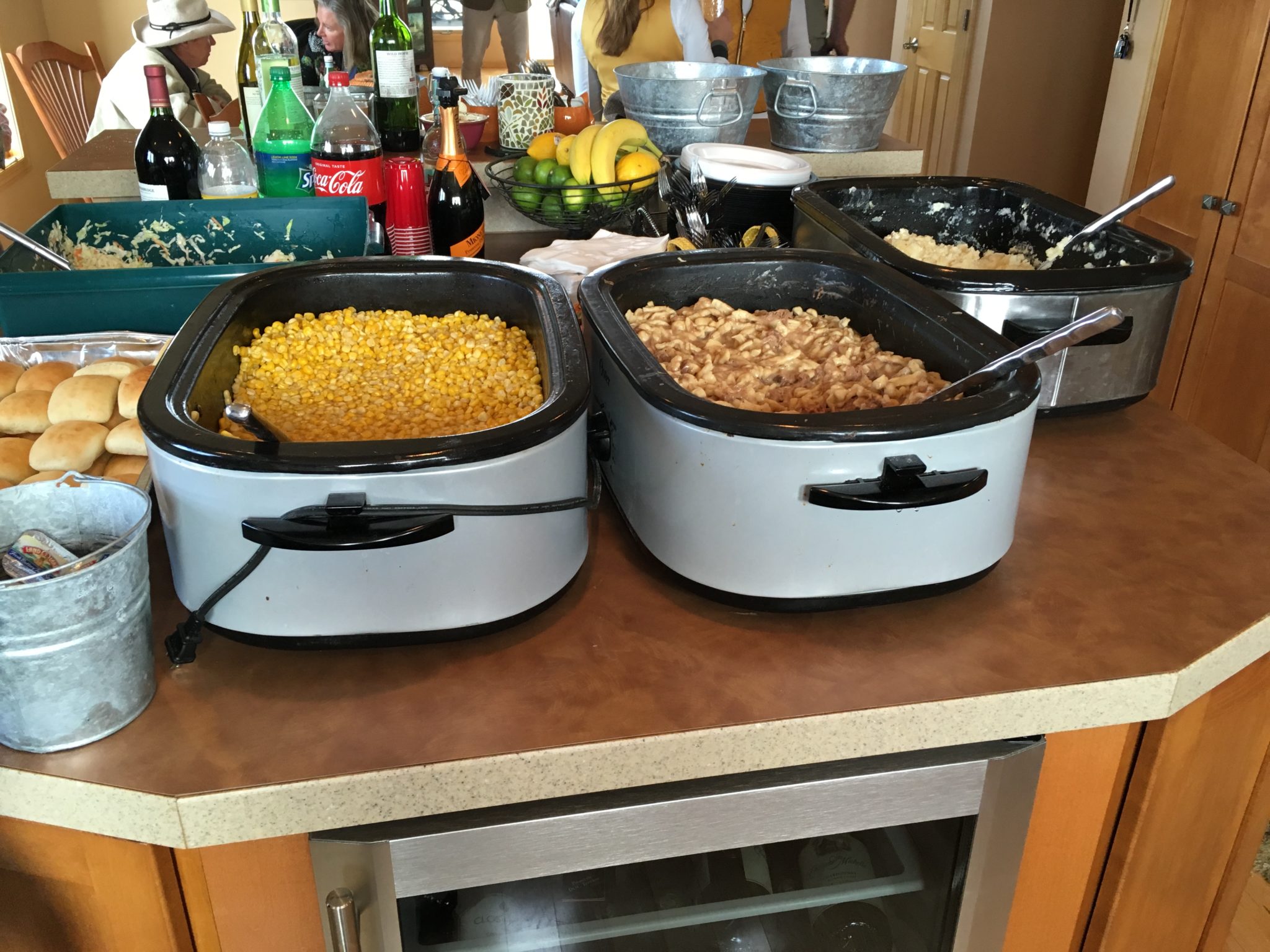 Good bye Burwell, until we see you in December. We are so blessed to have such a big, spectacular fixture to hunt.
Carine & Queenie (that’s my trucks name)